Kenneth Murray Was Not Recruited By WVU 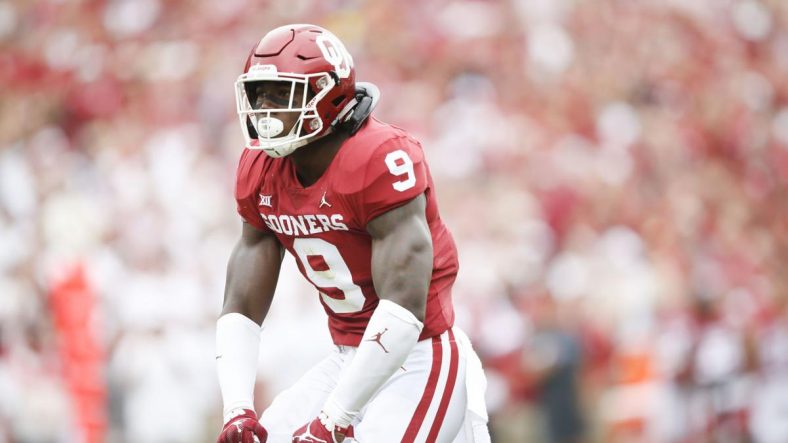 Kenneth Murray is the best defensive player in the Big 12 and it’s not even close.  The Big 12 Preseason Defensive Player of the Year led the Sooners with 155 tackles, including 28 in one game against Army, last season.  In his first game of the season against the Houston Cougars, Murray had 14 tackles, 4 for a loss and 1 sack.

The 6’2 242 pound Junior from Missouri City, Texas, “only ever wanted to play for the West Virginia Mountaineers”, according to a WV MetroNews report.  “That’s pretty much all I knew,” Murray said of West Virginia football.

You see, Murray’s uncle, Lind Murray, played Defensive Back for the Mountaineers in the early 1980s and Kenneth grew up loving the team.  According to an interview with The Oklahoman last year, the former Mountaineer and Uncle to Kenneth claimed then-Head Coach didn’t recruit the best defensive player in the Big 12 at all and even ignored him when he expressed major interest in playing for the Mountaineers.

Lind, who still lives in the Morgantown area, went on to tell The Oklahoman, “West Virginia had a chance to get Kenny and they chose not to recruit him.  I remember telling the coach up here that he was either going to play for them or play for somebody else against them.”

Murray took an unofficial visit to Morgantown and attended camps there but was not offered a scholarship and was not recruited anymore by Holgorsen and staff.

“I figured they should’ve at least given him a shot or at least a little better look than what they did. … But I figured wherever he was meant to play, he’s meant to play and he’ll carve out his own legacy at Oklahoma.”

Dana Holgorsen, the very coach that didn’t recruit the top high school player in state of West Virginia in the past decade, Darnell Wright, also passed on recruiting the best defensive player in the conference as well.

While the former Head Coach complained about not being able to recruit players to West Virginia and not beat Oklahoma, he did not try to get the top recruit in the state and gave up the best player in the conference to the Sooners.  Watching his team get rolled by Oklahoma in the season opener, you have to wonder if Holgorsen watched Murray’s brilliant game and wondered what could have been.