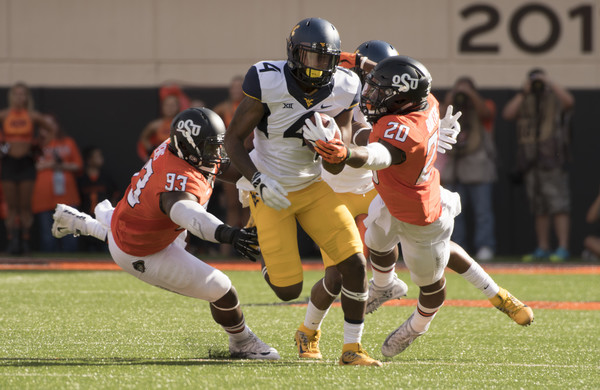 Kennedy McKoy established himself as a contributor during his freshman season while rushing for 472 yards and four touchdowns. With the conference’s leading returning rusher starting at running back, McKoy will get some time at wide receiver. In fact, Dana Holgorsen confirmed that as of now, Holgorsen is one of the top 4 receivers on the team.

.@Holgorsendana says Kennedy McCoy is one of the team's top 4 receivers. He'll play both receiver and running back. pic.twitter.com/ZfpPeXv0c4

“Right now, Kennedy is capable of being the main guy, but [senior running back Justin] Crawford is pretty good,” Dana Holgorsen said. “We’ll use McKoy in a lot of different ways, which he did in the spring. In my opinion, he’s one of our top four guys right now.”

Currently Holgorsen has McKoy as his best “H” receiver. which is one of two slot options in the WVU offense.

“It’s a little more open space out there,” McKoy said when asked about operating in the slot. “You get to work, try not to let the defender get his hands on you. More free.”

With the recent hits to the receiving corps from suspensions and transfers, it has opened up an opportunity for McKoy to get more time on the field. To his credit, he is willing to do what it takes to get on the field and contribute to the team.

“I’m all for the team,” McKoy said. “I just take advantage of all the opportunities that I get. As soon as I step on the field, I’m giving 100 percent effort and I’m trying to go score every play.”

McKoy showcased some great ability in his freshman season. Getting him the ball in open space will create potential for some big-time plays. There will still be plenty of opportunities for McKoy in the running game this move just expands the ways to get him involved.