Kansas Should NOT Be Taken Seriously 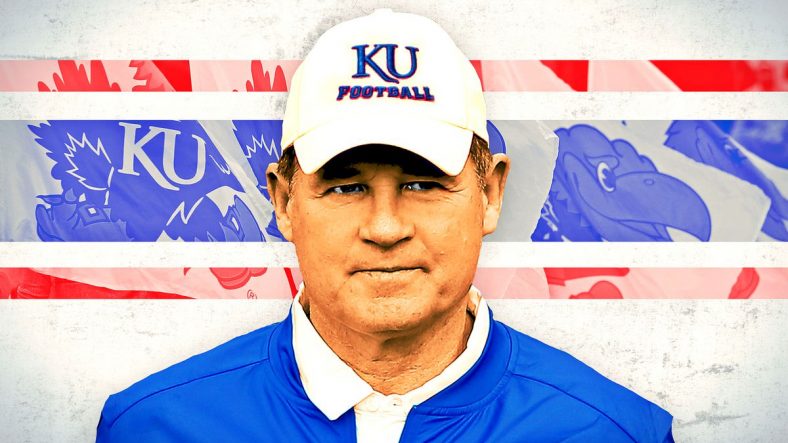 Kansas is one of the worst football programs in the country in the past decade and crazy old Les Miles won’t do anything to change that.  A team that has gone 23-90 in the past ten years is not only bad, they are terrible.

Les Miles was a fine, eccentric coach that was lucky enough to coach at outstanding schools Oklahoma State and LSU, but he is not a program-changer.  In fact, he is very much the opposite.  Miles will never have a good recruiting class at Kansas and is not a good enough Xs and Os coach to get this team out of the mediocrity that they have been mired in for so long.

According to Sam Hellman of 247 Sports, “The problem is, he had two hands wrapped around the neck of the LSU offense during his entire tenure. He is not an imaginative coach. He is not a coach that is necessarily going to move the needle outside of a fertile, talented region. He’s not going to go to Lawrence, Kansas, and bring in a ton of really talented prospects.”

Although Kansas shockingly beat Boston College last week on the road and narrowly escaped an upset bid by Indiana State in their home opener in Week 1, they also lost to Coastal Carolina 12-7 in Week 2.  Coastal lost to Eastern Michigan in the week prior to beating Kansas.  So while the upset win at Boston College was huge for their program, they are far from a team that should be taken seriously.

This should be an automatic win for the Mountaineers.  Neal Brown’s team will walk into Lawrence and remind Kansas that they are Kansas en route to another status quo beatdown of the Jayhawks.

While Neal Brown’s coach speak painted the Kansas offense as powerful with a deep, talented group of running backs, it’s important to remember that this is a Les Miles team and ultimately it’s a Les Miles offense.  Although a big name coach like Miles gives the Kansas fans a brief moment of excitement, Miles was not the right hire for the job and Kansas will not be any better with him as the Head Coach.