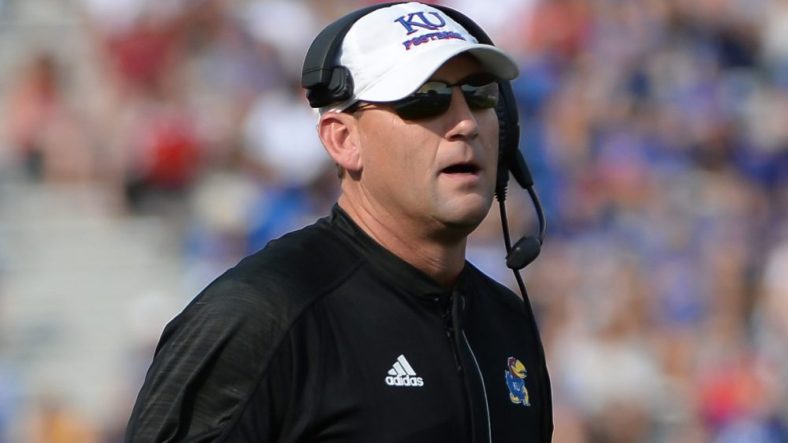 Let’s be honest, WVU’s last two opponents were not exactly juggernauts. Regardless, the offense has been impressive. Kansas coach David Beaty braces for impact against the Eers offense.

It all starts with quarterback Will Grier. He is ranked 10th nationally in passing yards (1,017). He has been especially successful going deep, leading the Power 5 conferences with 544 deep passing yards.

The Mountaineers are getting it done on the ground as well. Senior running back Justin Crawford is ranked 15th in the country with 108.7 yards per game. His 10 touchdowns tie him for 26h in the nation.

Then there’s the receiving core.

Kansas coach David Beaty is very well aware of the powerful Mountaineer offense. He knows that in order to have a chance in this game he will need to slow them down.

When asked about Sills, Beaty raved about him as well as the whole group.

“Sills is a matchup issue,” Coach Beaty said. “He’s a tall, long, rangy guy. He looks like he could be a tight end, but he obviously is slender enough and quick enough to play wideout. He’s a guy that, every time I open up the stat pages, he’s doing something for them.

“But then you’ve got guys over there like Gary Jennings, who is a terrific player. He makes them go in a lot of ways. You’ve got Ka’Raun White, who can run as fast as a dadgum Ferrari. That guy can fly.

“Marcus Simms can absolutely fly. They’ve got some really fast guys. They always have. Their new quarterback, Grier, the transfer, is a really talented guy. And Justin Crawford is a guy that’s really stuck out.”

Beaty’s claims are supported by statistics. Coach Holgorsen still needs to see more before heaping on that kind of praise.

“Collectively, they have a chance to be good. They’re not anywhere close to where I think they’ll be toward the end of the season. By no means am I ready to compare any of them to those guys of my past.”

“With the running back group, I’m happy with Crawford. I mean, he’s been consistent in our three games, which is what I wanted to see from him. He’s had over 100 [yards] all three games. I like his consistency for sure.”

“I’ve been studying all three sides,” Holgorsen said. “They look better. I know they’re disappointed in the outcomes of the last two games, but they were incredibly competitive games. A couple of breaks here and there and they could be sitting at 3-0.”

How bad have the Jayhawks been? Check out this dumpster fire of a play they put forward against Ohio.