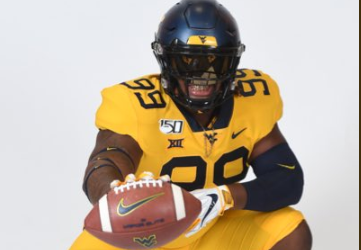 Mays played last season at Northwest Mississippi Community college where he racked up 15 tackles, two and a half tackles for loss, two sacks and one forced fumble.

WVU offered the tackle a scholarship back in February, shortly after Neal Brown was hired as the new head coach. After his June 14th visit, Mays took to twitter to show his appreciation for new Coach Brown, as well as assistants Al Poque and Jordan Lesley:

If the junior commits, he’ll become a member of the WVU recruiting class of 2020. Mays has received offers from 12 total schools, including Houston, Iowa State, North Carolina, Troy and UCF.

Both Rivals Future Cast and 247 Sports Crystal Ball Predictions has the chances for a Mays-WVU Commitment at 100 percent.

While he did visit fellow Big 12 foe Iowa State Friday, we needn’t look any further than Mays’ twitter profile picture to see which school is the favorite to land the defensive stud:

*Highlights of Mays; can be found on 247 Sports: http://www.hudl.com/v/2ArEms