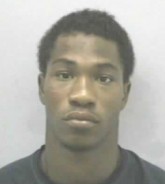 Innocent until proven guilty, but this doesn’t sound good.
Check it out:

Mountaineers coach Dana Holgorsen announced Thursday that Henry—after being charged with second-degree sexual assault—is no longer a member of the team, ending a two-month run with the squad.

“D’Vante Henry had been indefinitely suspended from game participation,” Holgorsen said. “There was strict parameters put in place that he had to abide by in order to play next season. The allegations made against him are troubling and very serious. He is no longer a Mountaineer.”