Jovon Durante to Transfer From WVU to Florida Atlantic 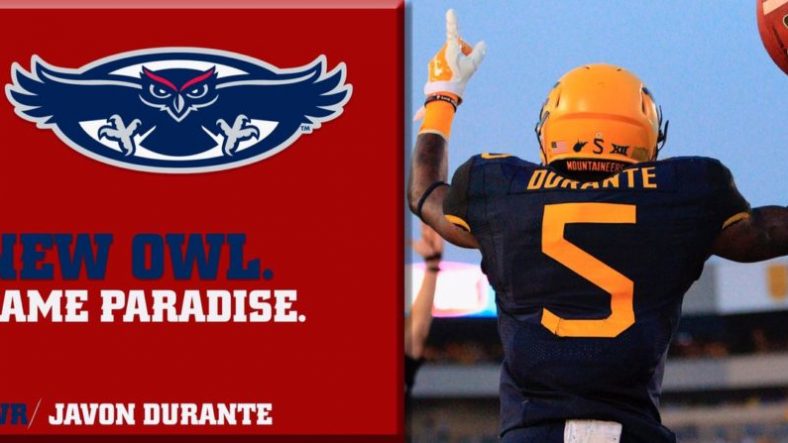 Jovon Durante has announced his intention to transfer from WVU to Florida Atlantic. This comes as no surprise after Durante failed to report to fall practice. Durante was reportedly dealing with personal issues.

Durante had a very memorable start to his career in Morgantown. His first 2 games as a Mountaineer in 2015 included 9 catches for 164 yards and 2 touchdowns. He trailed off sharply the rest of the season, ending up with 24 catches and 5 touchdowns for the 2015 season. The 2016 season Durante had 35 receptions and 2 TDs.

Newly hired Florida Atlantic Coach Lane Kiffin has turned their program into a destination of second chances. He joins former Florida State quarterback De’Andre Johnson, former Louisville defensive end Tim Bonner, former Pitt defensive tackle Jeremiah Taleni and many others as players on this roster that didn’t work out somewhere else and are now getting a shot at Florida Atlantic.

When discussing the motivation for bringing in and retaining players with checkered pasts, Kiffin had a very simple response.

“We need to fix our roster,” Kiffin said.

Jovon Durante is from Miramar, Florida and will have to sit out the 2017 season in order to be eligible for the 2018 season to play for the Florida Atlantic Owls. He will have two years of eligibility remaining.