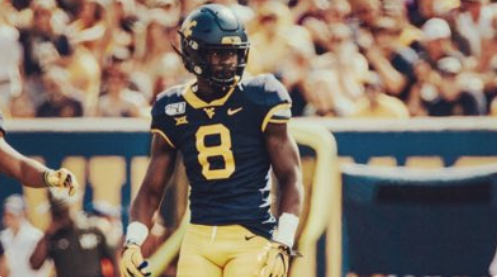 Earlier today it was reported by Mike Casazza of EerSports that senior spear JoVanni Stewart is sitting out Saturday’s game against the Texas Longhorns and may be done with playing for the Mountaineers altogether.

It appears Stewart is strongly considering using the four-game redshirt rule. If that’s the case he will not play another game for WVU this season and be a postgraduate transfer at the end of the season.

.@WVUFootball will be without one of their veterans in the secondary. https://t.co/nUohxVMJrS

Stewart started the first four games of the season at the spear position for the Mountaineers. He started the final 11 games of the 2018 season at Sam linebacker, despite standing 5’8″ and weighing 195 pounds. JoVanni Stewart has been the ultimate teammate and has done whatever he can to help the Mountaineer defense. In that regard, this move comes as somewhat of a surprise.

With all due respect to JoVanni, there is a silver lining to this move, Mountaineer fans.

JoVanni Stewart’s backup happens to be one of the biggest secondary recruits WVU has landed in recent years. Kwantel Raines is a 6’2″ 212 pound hard-hitting safety who happens to wear the same number as another Mountaineer safety who laid the wood: Karl Joseph.

Kwantel Raines does a FRONT FLIP for a score. Is this the WPIAL Play of the Year already??? pic.twitter.com/p3aZ1xfmP4

Raines comes from Aliquippa High School which has established as a hotbed for defensive backs. Both Darrelle Revis and Ty Law played at Aliquippa. Oh and Mike Ditka went there. He’s not a defensive back, but he’s Mike Freaking Ditka.

This isn’t WVU’s first Quip to be on the roster. Dravon Askew-Henry for one. Another is former Mountaineer and NFL safety Charles Fisher.

Now that your Aliquippa history lesson is out of the way let’s talk about Kwantel Raines. The four-star recruit received offers from Florida, LSU, Michigan State, Pittsburgh nearby Pittsburgh, Wisconsin and more.

Many Mountaineer fans are hopeful to see Bridgeport product Donte Bonamico get more playing time with Stewart heading out. He will have a better chance of seeing the field, but make no mistake about it: Kwantel Raines is ready to step in and provide a major upgrade to the Mountaineer secondary.

It was a matter of time before the talented Raines forced his way onto the field. The exit of Stewart only expedited the process.

Keep your eye on No. 8 Saturday in the Mountaineer secondary.