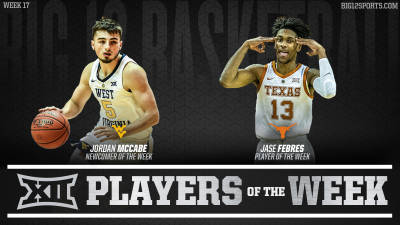 Mountaineer freshman Jordan McCabe has arrived and people outside of Morgantown starting to  take notice. Jordan McCabe named Big 12 Newcomer of the Week.

Congratulations to Jordan McCabe – the Big 12 Newcomer of the Week. pic.twitter.com/8ClGjuQRx4

McCabe had some outstanding numbers over the week. He averaged 21.5 points, 7.0 assists, 4.5 steals and 3.0 rebounds per game, with West Virginia going 1-1 including a triple overtime win over TCU. In the win, McCabe had 25 points, 11 assists, six steals and five rebounds. Not a single men’s college basketball player has put up those statistical numbers since 2010.

The McCabe coming out party began on the road against Baylor on February 23rd when McCabe played 38 minutes and had 14 points.

At that point the Mountaineer freshman was just getting started. His historic performance against TCU helped snap a five-game losing streak for West Virginia and announced to the rest of the Big 12 that the Mountaineers have a very formidable freshman duo. McCabe logged 50 minutes in this game. Before the Baylor game McCabe had only been over 30 minutes one time this season.

McCabe kept up his strong play against Oklahoma when he had 18 points to go with three assists and three steals.

The sensational play by freshmen McCabe and Culver has given Mountaineer fans a reason to be optimistic during a season which has been a massive letdown. Coming into the season no one would have predicted that Sagaba Konate, Esa Ahmad and James Bolden would be playing no role on this team as they head into March.

Barring a miracle, this team will not be dancing in a few weeks, but McCabe and Culver have given the team two very solid building blocks going into the 2019-2020 season.

Country Roads, good to have ya back! pic.twitter.com/7KkWcfx0yR

West Virginia has two regular season games remaining. They will be at home against Iowa State on Wednesday at 7 p.m. and finish up on the road Saturday March 9th against Oklahoma State as the team looks to build some momentum going into the Big 12 Tournament.

Oh and Jase Febres of Texas was named the Big 12 Player of the Week. Yawn.