Jordan McCabe After Disappointing Loss to Coastal Carolina: ‘Next Season is Gonna be Different’ 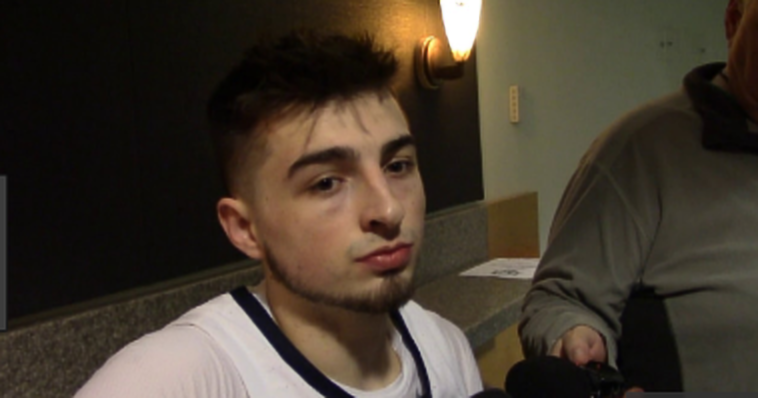 McCabe acknowledged that the team let the fans down, but told them to keep believing because next season is going to be very different.

Freshman guard Jordan McCabe (@JordanMcCabe5) had a message for @WVUhoops fans after the disappointing 109-91 loss to CCU in the CBI.

He says he knows the team let fans down, but wants them to keep believing: “Next season is gonna be different.” https://t.co/MhMEDOaDyV pic.twitter.com/iTvU7H0eJW

While this wasn’t quite as inspiring as Tim Tebow after his team’s loss against Ole Miss, but it was still good to see. The young Mountaineer guard took accountability for the season and is confident the team will be back on track next season.

Jordan McCabe wasn’t the only Mountaineer frustrated by the loss. Bob Huggins let loose in a postgame conference where he said he will not compromise his principles for one players.

This was not expected to be a transitional year for Bob Huggins and the Mountaineers, but it turned out to be just that. A team led by Sagaba Konate, Esa Ahmad and Beetle Bolden was expected to contend for the Big 12 title and be playing deep into March, just not in the CBI. Instead those three players were virtually non-factors this season with two of them not even on the roster at the end of the season. Starter Wesley Harris was also dismissed. To say this was a tough year would be an understatement.

After Huggins removed the dead weight from the roster, the team appeared to be improving and their confidence was growing. They were able to travel across the country and win back-to-back games against NCAA Tournament-bound Oklahoma and Texas Tech, who is slated to take on Michigan in the Sweet 16. Then the Coastal Carolina Chanticleers came into the Coliseum and had their way with WVU. You can blame it on hot shooting, but it’s a lot easier to shoot well when nothing is being contested.

On top of that, Derek Culver was forced to sit out for the first half. After enduring a long suspension that lasted until nearly the end of December, Culver promised that he had his head on straight and was ready to contribute. He arrived late for the workout and was replaced in the lineup by Logan Routt.

Even when Culver returned, West Virginia was still outscored by four points in the second half.

It’s undeniable this team has some talent returning next season with McCabe, Culver, Haley and Matthews. They will be joined by incoming freshmen Oscar Tshiebwe and Miles McBride, but if this team wants to get to the next level they can’t be showing up late for meetings and having a player suspended or dismissed on a regular basis.

Has Bob Huggins lost his ability to relate to the young players? Saying that would be jumping the gun, but if next season has as much turmoil as this one then there will be plenty of panic surrounding the West Virginia men’s basketball program.

Don’t count on that happening, though. With Bob Huggins at the helm and the talent returning, the Mountaineers will be back on track for the 2019-2010 season and will be dancing into March.