What Does Champion Eater Joey Chestnut Think of the Favorite Food of West Virginians? 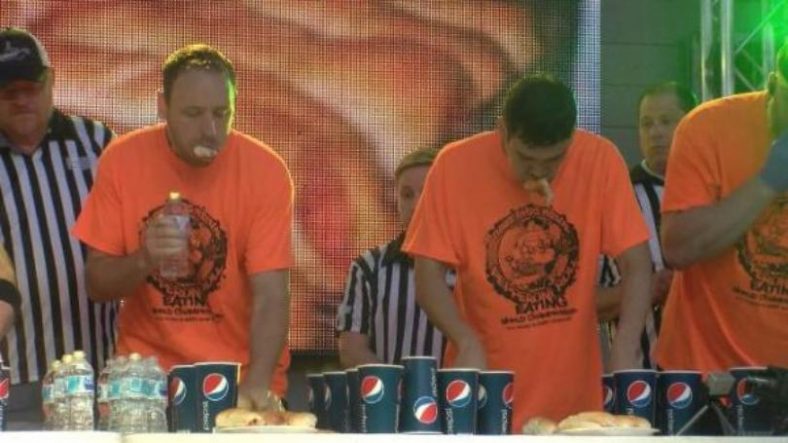 Joey Chestnut has made a name for himself for winning the Nathan’s Hot Dog Eating Contest every year on July 4. This weekend he tried something different.

As part of the festivities at the 2019 West Virginia Three Rivers Festival, Chestnut traveled to Fairmont, West Virginia to take part in the 9th annual World Pepperoni Roll Eating Championship.

Chestnut last appeared in the contest in 2013 when he ate 28 pepperoni rolls. The record was held by Geoffrey Esper, who ate 36 pepperoni rolls in 2017.

Both of these competitors broke the record. Esper took down 37.5 Country Club Bakery pepperoni rolls, considered by many as the best pepperoni roll in the world.

In typical Joey Chestnut fashion, he broke the record and won the championship. It took Chestnut just ten minutes to take down 43 pepperoni rolls. According to the master of ceremonies, Diamond Dave, Joey came into the contest already holding 45 records.

While speaking with 5 News, Chestnut said he wasn’t even full after he won the contest. He also talked about how good the pepperoni rolls.

“It’s unique because they’re so good,” Chestnut said to 5 News. “They’re fluffy, but they’re doughy. It’s a lot of things at one time. There’s that little piece of pepperoni in there and a little cheese; it’s just so unique and tasty. They’re hard enough to eat that I don’t feel full afterward. I feel like I could keep eating.”

This was an officially sanctioned event by Major League Eating and was sponsored by Country Club Bakery, who provided the pepperoni rolls along with the Marion County Commission.

Chestnut spoke highly of Fairmont and his experience with the park and festival.

“It’s a beautiful place,” Chestnut said about Fairmont. “It’s a great park and a great festival. It’s great to be back here.”

Kudos to the Three Rivers Festival in Fairmont for getting a household name to the festival and having him put on a show while setting a world record.