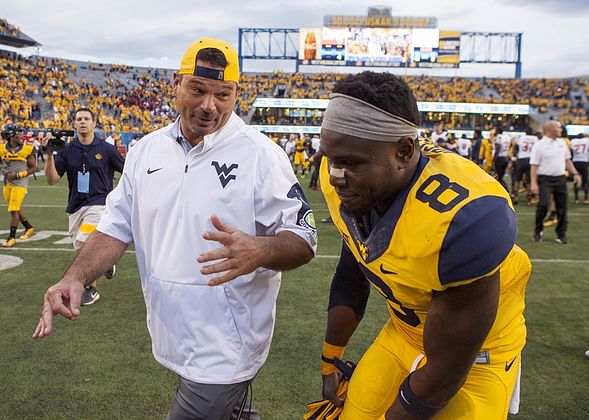 DeForest joined the WVU staff in 2012 as defensive coordinator. Unfortunately that role didn’t work out very well. The Mountaineer defense gave up 472.5 yards of total offense in 13 games along with 37 points per game. After the season, DeForest was demoted.

In his next role he handled special teams. In this role he was ripped for every mistake special teams made and there were a lot of them.

Maybe the criticism was warranted, maybe it wasn’t. DeForest wasn’t actually out there muffing the punts and blowing the assignments. That said, it is very likely he did not have the personnel in the best positions to succeed.

After the 2015 season DeForest’s contract was up and he was not offered a new one. WVU fans were relieved of their scapegoat on defense and special teams.

2017 is DeForest’s first year with Kansas. He is an assistant coach and one of his duties is, you guessed it, special teams coordinator.

Joe DeForest is in his first season on the Kansas coaching staff where he serves as the Jayhawks’ special teams coordinator.

Known nationally for his special teams expertise, DeForest brings with him 26 years of collegiate coaching experience, including having coached in 13 bowl games. He was named a Rivals.com Top 25 recruiter in 2004, 2006 and 2008, and has coached 28 all-conference performers, 10 All-Americans and 11 players who have gone on to play professionally.

“We are excited to add Joe to our staff” said Beaty, who is in his second season at the helm of the Jayhawk program. “His special teams units have been among the top in every category throughout his time in the Big 12. He brings a wealth of experience and knowledge that will help our program moving forward.”

Mountaineer fans everywhere can have a good laugh at that. WVU fans still give this guy a hard time even though he is long gone.

No, Joe Deforest has not returned to WVU.

If someone on Kansas muffs a punt Mountaineer fans everywhere will certainly have a good laugh at DeForest’s expense.

Regardless of what you think of Joe DeForest, it will be interesting to see Coach Dana Hoglorsen taking on one of his old buddies. Several of the players on the current WVU roster certainly have ties with Joe DeForest.