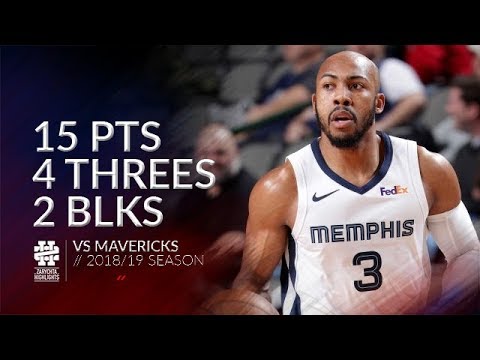 In a 99-95 loss to the Oklahoma City Thunder, Memphis Grizzly rookie Jevon Carter sets a career high in points and blocks. Carter had 15 points, three rebounds, two blocks and a steal in just 12 minutes. He also hit four three-pointers.

Carter amassed career highs in points and made threes while matching his career best block total. This is just the second time this season that Carter has reached double figures in scoring, though the 23-year-old rookie could be in line to earn a more consistent role down the stretch.

Carter has received seven G-League assignment sand played 15 games total for the Memphis Hustle. He has performed very well there, leading the league in steals per game (3.2) and also averaging 18.3 points, 4.9 rebounds and 5.1 assists in 33.3 minutes.

Man media outlets are calling for an increased role for Carter. Per Beale Street Bears:

This demonstrates that he is built for the professional game. He is undoubtedly a top NBA prospect. However, when the Grizzlies’ major downfall began to quickly unfold in December, that is the time in which Head Coach J.B. Bickerstaff should have made Jevon a high priority in the rotation.

Again, prior to Saturday’s game between the Grizzlies and Mavericks, Jevon Carter had logged minutes in 26 of 63 games. Being as he is not a two-way contractual player, there is no restriction on the amount of games Carter can play in the almighty NBA.

A hefty load of G-League stints plus NBA action would have been ample opportunity to expedite this particular youth development project for the Grizz. Yet, this is where we stand today.

Carter has been providing offense and additional to that he is an outstanding defensive player. His play on Saturday confirms that he should have an increased role. The team has 18 games left and with them out of playoff contention they should definitely be exploring the capabilities of rookie Jevon Carter.