Jevon Carter Making a Name For Himself in the NBA 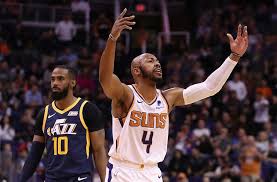 Four games through the start of the Phoenix Suns’ season, Carter is proving to be much, much more than expected from anyone.

To start the season, Jevon Carter is averaging 10 points, 3.3 assists and 2.5 rebounds per game while shooting 62% from the field and 50% from three point range.

Carter is doing so much more than can be seen in the box scores.  Carter is providing the Suns with real, quality minutes during crunch time.

The Valley of the Suns called Carter “one of those guys who you love to have on your team and hate when your team has to play against him. He has absolutely no fear whatsoever on defense, and apparently no fear he is ever going to get tired.”

According to the Head Coach of the Phoenix Suns, Carter is becoming someone that he can rely on.

“Yeah, he’s a gamer. You know he makes big shots without D.A. and some of the lineups we had out there, it’s hard to call plays. He is playing off the ball which he doesn’t do sometimes or a lot. For him to come off and takes the shots, for me it’s a biggie, but he makes them and he’s not afraid of them. For me, he is a guy that I can rely on in those moments, he is not afraid of taking big shots.”

Carter, who Williams says “eats rocks”, finished the game with 15 points, 4 rebounds, 3 assists and 2 steals.  West Virginia fans already know what Jevon Carter is capable of, but the rest of the world is now learning just how special he is.

Teacher : What do you want to be when you grow up?