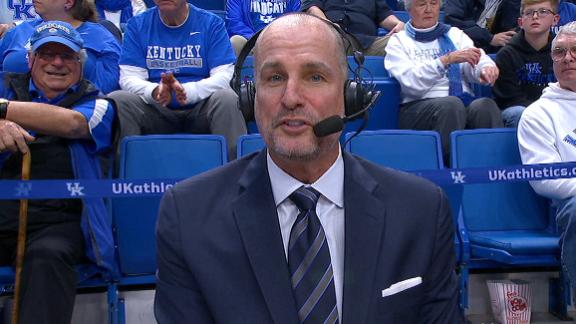 It took a while, but ESPN is starting to join the WVU bandwagon. Jay Bilas think the rest of the nation should be scared of the Mountaineers. Press Virginia is a force to be reckoned with and Bilas is letting the country know about it.

This isn’t the first time ESPN has heaped praise on this Mountaineer basketball team.

While on a segment on SportsCenter with Scott Van Pelt, Bilas said, “I’ll tell you a team that I would be scared of right now, and that’s West Virginia.

“West Virginia is older, they’ve got senior guards, and their best guard is Jevon Carter, and he’s just about as good as anybody out there, and may be the best defensive guard in the country. They are wreaking havoc on people with their ability to guard.”

Bilas also took to Twitter about his fear of Bob Huggins.

Well, I am mostly scared of Bob Huggins. The team's defense is pretty scary, too. https://t.co/vvRpLX1WNT

The Mountaineers are on fire, having reeled off 15 wins in a row. The last game against Baylor was tougher than expected, which is not surprising as it was sandwiched between some extremely tough games. Baylor has given the Mountaineers fits since joining the Big 12.

So what’s next? A trip to Lubbock for another top ten matchup against the Texas Tech Red Raiders. The grind of the Big 12 is tough and the constant barrage of ranked teams should pay off big when it comes tournament time in March.