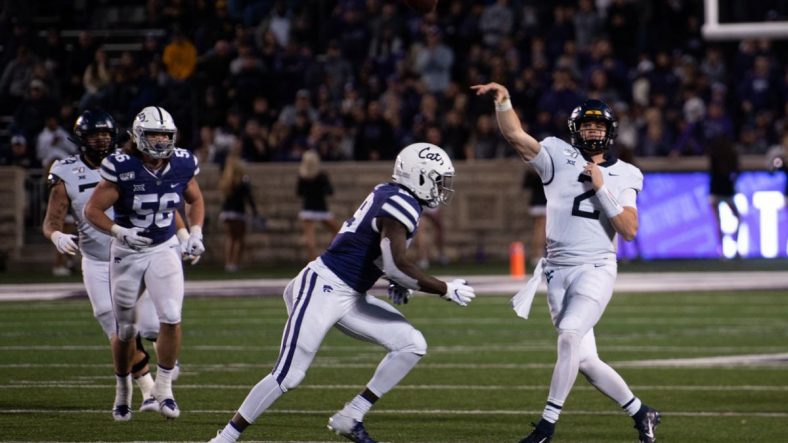 Jarret Doege made his debut as the WVU starting quarterback. It was a massive success as he led the Mountaineers to a road win over a ranked Kansas State team.

Doege was 20-of-30 for 234 yards and three touchdown passes. With his team trailing by six points going into the fourth quarter, Doege was able to lead the team to two scoring drives that were set up with great field position thanks to the Mountaineer defense.

Somewhere Doege excelled specifically was his third down magic. All three of his touchdown passes happened on third down.

West Virginia threw three TD passes against Kansas State on third down in the win in Manhattan.

That was no easy trick.

The Wildcats had allowed a TOTAL of three third down TD passes in their previous 21 games collectively heading into the matchup with the Mountaineers. pic.twitter.com/gzSNlynZwq

Opponents' 3rd down passing totals against K-State in first 9 games this season:

WVU's 3rd down passing totals against K-State on Saturday:

The second one was on third and 13. He was flushed out of the pocket and threw a dart on the run to George Campbell.

Then there was this 50-yard touchdown pass to Bryce Wheaton on third and 22 that put the Mountaineers in the lead for good:

Stand up in they chest no apology, mama sent a text say she prada me.. pic.twitter.com/eiK06hDxNz

It’s amazing how things can change over the weekend. Many Mountaineer fans were pushing for a quarterback change. Neal Brown waited until there were just four games left.

Turns out maybe there was a method to HCNB’s genius. He has Jarret Doege for two more years after this season.

When you combine the play of Doege with the way the Mountaineer defense played against Kansas State, suddenly things are looking very good for the 2020 WVU football season.