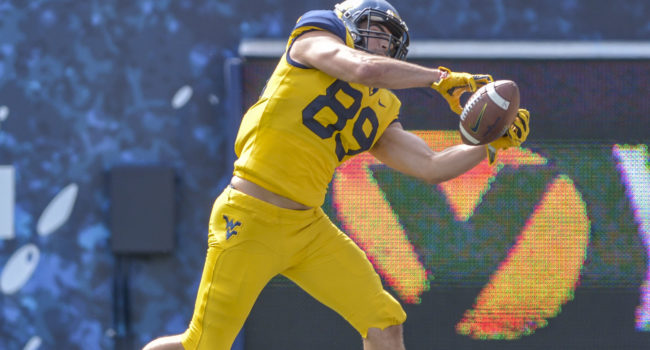 Riley Stapleton, who led James Madison in receptions, yards and receiving touchdowns in 2018, will miss the season opener against WVU after being suspended for the first three games of the season.

Earlier this year Stapleton pleaded no contest to a false imprisonment charge. More on the story from WSHV:

According to court documents, he kept a woman from leaving the bathroom at a house party and “attempted to have indecent contact,” but failed “due to his intoxicated state.”

According to the criminal complaint, the woman said Stapleton pulled her leggings down and unbuckled his pants as she struggled to free herself from his grip and told him to stop.

She said she was able to leave the bathroom when a partygoer knocked on the door and called Stapleton’s name. She left the home after other partygoers comforted her and then went to a local hospital to report the incident.

Stapleton told investigators that he had no memory of the incident because of being “blacked out” from over-consumption of alcohol. He did not plead guilty, but pleaded no contest, which means a suspect acknowledges the prosecution has enough evidence to prove their case but does not admit guilt to the charge. He was convicted of false imprisonment, and never faced charges beyond that.

JMU wide receiver Riley Stapleton – who pleaded no contest to falsely imprisoning a woman in a bathroom – has been suspended for the first 3 games of the season:https://t.co/diMRFznAnB

Despite their leading returning receiver being suspended, James Madison will still have plenty of options at wide receiver. One of those options comes in the form of former Mountaineer Dillon Spalding.

You may recall that Spalding actually played in the Gold Blue Spring Game this year, catching a touchdown pass from Trey Lowe.

The 6-1, 215 pound redshirt freshman out of Lorton, Virginia was a three-star recruit before committing to West Virginia. Despite a mass exodus of talent from the West Virginia receiving core, Spalding decided to enter the transfer portal and ultimately take his talents to Harrisonburg, VA and be a part of the FCS powerhouse James Madison Dukes.

Spalding isn’t the only receiver from a Power 5 school to transfer to James Madison. Graduate transfer Brandon Polk from Penn State will also be on the roster. During the 2018 season he made seven starts for Penn State, grabbing nine catches for 162 yards and a couple of touchdowns.

An inexperienced Mountaineer secondary could have their hands full with the James Madison receiving core, even with Stapleton out of the mix.