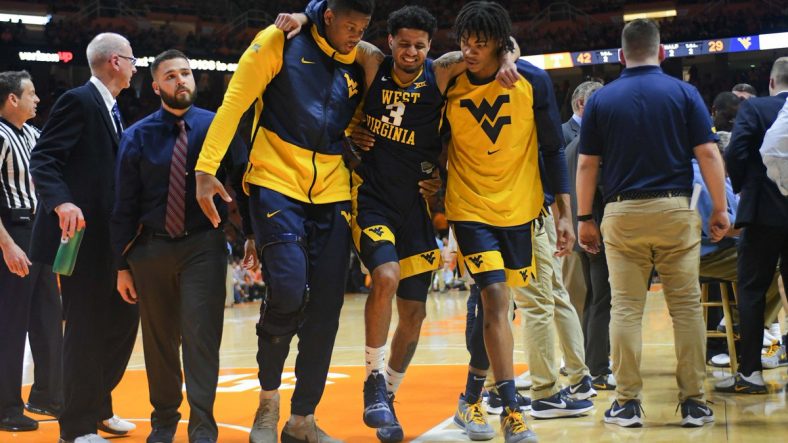 According to a source, James Bolden is leaving the West Virginia basketball team. Bolden has fought injuries all year and has missed the past ten games.

Late-breaking news here: #WVU guard Beetle Bolden has left the team. Not dismissed, per source. Was not with the team against Iowa State. Bob Huggins said Tuesday Bolden was set to graduate in May. Could be a grad transfer somewhere next season.

The source reports that Bolden was not at Tuesday’s practice nor was he at the final home game.

“He’s gone,” the source stated. This source was first reported by the Times West Virginian.

This makes three starters from this team that did not make it through the end of the season. Esa Ahmad and Wesley Harris were dismissed from the team a couple weeks ago.

During the 18 games Bolden did play, he led the Mountaineers in scoring, averaging 12.2 points per game in just 21.4 minutes a game.

For Bolden’s first two seasons he was the third guard, backing up Jevon Carter and Daxter Miles Jr. This was supposed to be the season where he moved into the starting lineup and became one of the focal points of the Mountaineer teams. This was derailed by injuries.

Bolden still has one season of eligibility left and according to Bob Huggins he is set to graduate in May. He is a great candidate to be a graduate transfer for another major program. He has big game experience and has shown the ability to knock down the big shot in the past.

This opens up another scholarship for West Virginia going into next season. As reported yesterday, there is expected to be more attrition after this season ends. Well, it has happened and the season hasn’t even ended yet.

Other likely candidates to move on at the end of this season include Andrew Gordon, Chase Harler and Lamont West. Gordon has not been getting any playing time and Harler and West are both set to graduate and have one year of eligibility left.

Despite the distractions, West Virginia was able to defeat Iowa State on Senior Night by a final score of 90 to 75.