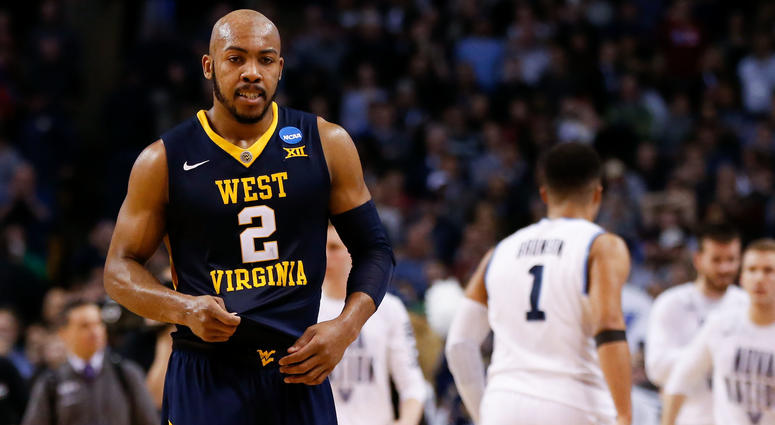 Mar 23, 2018; Boston, MA, USA; West Virginia Mountaineers guard Jevon Carter (2) walks of the court after losing to the Villanova Wildcats in the semifinals of the East regional of the 2018 NCAA Tournament at the TD Garden. Mandatory Credit: Greg M. Cooper-USA TODAY Sports

West Virginia Athletics moves as a snail’s pace.  Their inattention to detail and unwillingness to honor the great Mountaineers of the past has always been an issue.  Major Harris, Pat White, countless others who accomplished outstanding feats in Morgantown have gone largely unnoticed for what they have done for the university.

Retiring a jersey is the ultimate way to honor a former player and it really doesn’t require all that much effort.  Perhaps only eclipsed by building a statue, which is a far more challenging proposition, retiring a jersey is easy and inexpensive.

With that said, no one, I mean no one, exemplifies the Mountaineer spirit better than Jevon Carter.  Carter led the Press Virginia era for all four seasons, teaming up with Daxter Miles Jr. to make the most accomplished backcourt in WVU history.

Carter had many accomplishments while at West Virginia, averaging 17.3 points, 6.6 assists and 3.0 steal per game during his Senior season.  He was the all-time steals leader at WVU and was the only player in Power 5 history to finish his career with 1,500 points, 500 rebounds, 500 assists and 300 steals.

Carter, who now plays for the Phoenix Suns in his second year in the NBA, was an Academic All-American, 2nd Team All-American, four-time Defensive Player of the Year in the Big 12, was the NABC National Defensive Player of the Year as a Senior, the list goes on and on, but even greater than all of his many achievements was the imprint that he left on the West Virginia basketball program.

West Virginians appreciate and value hard work more than anyone else in the world, and Jevon Carter is the personification of working hard and giving maximum effort every moment of every game.  In Carter’s “Treadmill Mentaility”, he said, “I know people talk a lot about my defense, and I’m glad that that part of my game has gotten recognized, but I also want everyone to know that there’s a lot more to me than that.  I’ll always be ready to lay it all on the line from Day One because I’ve been overlooked and criticized on the basketball court my entire life.  By everyone.”

Carter is the very embodiment of our great state – overlooked, underappreciated, hard-working – and should be recognized for all that he did for West Virginia University.  Honoring him by retiring #2 is as obvious of a choice as naming the basketball court inside the Coliseum “The Bob Huggins Basketball Court” and should happen immediately.