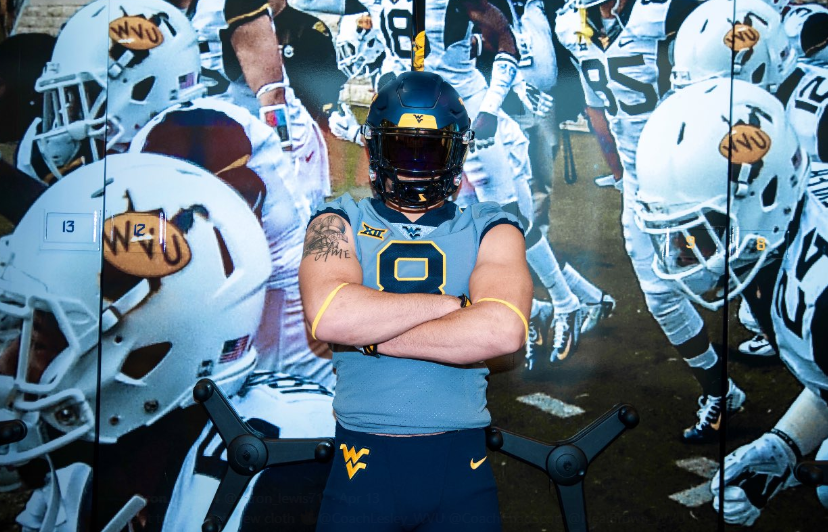 West Virginia went up against the powers of the Big Ten and got their guy. Defensive lineman Aaron Lewis of Williamstown, New Jersey officially made his commitment to play football at West Virginia University

West Virginia went up against the powers of the Big Ten and got their guy. Defensive lineman Aaron Lewis of Williamstown, New Jersey officially made his commitment to play football at West Virginia University. Kudos to WVU head coach Neal Brown along with his two assistants, defensive line coach Jordan Lesley and co-offensive coordinator Chad Scott, who helped land this monster recruit.

The build-up to his announcement has been epic. This young man could have a career in marketing after football.

Earlier we reported that his upcoming commitment to West Virginia was signed, sealed and about to be delivered. It was reported that he made up his mind while attending the Gold Blue Spring game this past weekend in Morgantown.

Yesterday Lewis took to Twitter to let everyone know to be on the lookout:

Be on the lookout tomorrow 👀

He had some fun with a Mountaineer fan on Twitter who mentioned that he hoped Lewis is the “secret commit” and “would be a monster get for WVU.”

Today Lewis took to Twitter with an emotional tribute that helped get him where he is today. It also points to 2:11 as the time when it was to be made official.

These recruiting journeys are so much more fun when they end up in Morgantown. Welcome to Morgantown, Aaron. Here is his official announcement: