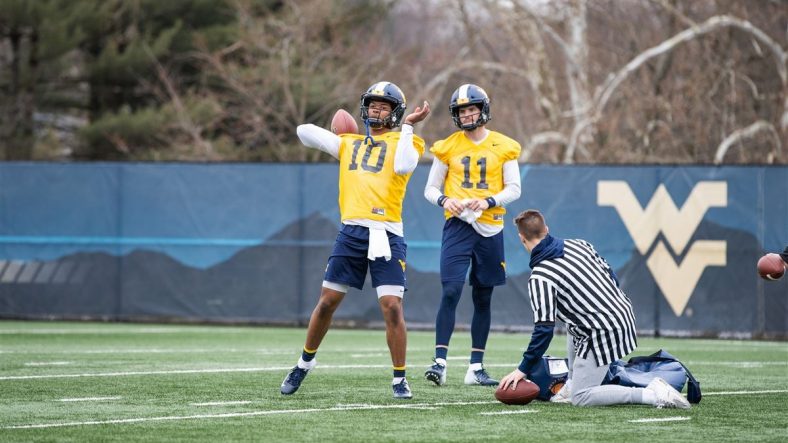 Although Neal Brown didn’t come out and exactly say it during his most recent press conference, Trey Lowe is finally going to get an opportunity to play when the Mountaineers travel to Norman to play the Oklahoma Sooners.

Brown, who doesn’t like to reveal much to the media or to opposing teams, gave a very not-so-subtle hint after announcing that starting quarterback Austin Kendall was “very questionable” for WVU’s upcoming game.

Translation:  When Austin Kendall was injured during West Virginia’s loss to Iowa State, Neal Brown thought that Jack Allison was the best available option to replace Kendall.  After watching tape of the game, that is no longer the case.  Allison had his shot and didn’t take advantage of it.  While Trey Lowe may not be exactly where we want him to be, he’s a far better option than Jack Allison if Kendall can’t play.

I would never hope for any Mountaineer player to remain injured, but let’s just say that Austin Kendall shouldn’t rush back from an injury.  Playing Trey Lowe would not only inject the Mountaineers’ offense with a much-needed spark, it would open up a huge range of possibilities in the playbook.

West Virginia’s run game will almost certainly immediately improve with Lowe running the Zone Read.  In addition,  Lowe will be very capable of running option plays and various other sets that are advantageous for dual threat quarterbacks.  Lowe gives the Mountaineers a chance against Oklahoma, regardless of how small that chance may be.

Smartly, Brown will not make the announcement that Lowe is likely starting in order to prevent Oklahoma from preparing for what he brings to the West Virginia offense.  However, the writing is on the wall if Kendall can’t play and I can’t be anymore excited for it!