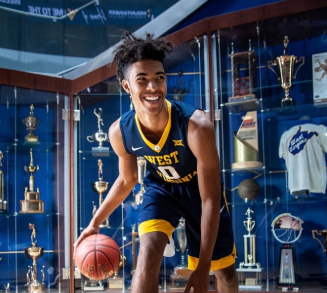 Isaiah Cottrell, who Mountaineer Sports once labeled as “the future of West Virginia basketball”, is transferring from Bishop Gorman High School in his hometown of Las Vegas, Nevada to Huntington Prep in Huntington, West Virginia!

Cottrell,  a 4 star recruit and the 61st ranked overall ranked prospect in the 2020 class according to 247 Sports, is a 6’10 210 pound power forward who averaged 5.2 points, 9.3 rebounds and 4.3 blocked shots per game.  He was a first team selection on the All-USA Nevada basketball team according to USA Today.  He also led his team to its 8th consecutive state title this past season.  Cottrell is everything Mountaineer fans want in a player: he’s unselfish, he’s insanely gifted athletically, he rebounds, has a very high motor and most importantly he’s a winner.

Cottrell was recruited by virtually every major program in the country, but his final schools came down to Rutgers, Missouri, Kansas before ultimately decided on West Virginia.  Not only is Cottrell a huge addition to an already incredibly talented Huntington Prep team, he could also serve as a major recruiter for top-tier prospects Jaemyn Brakefield (who immediately congratulated him on Twitter and said, “Country Roads Take Me Home…” following Cottrell’s commitment), AJ Hoggard and several of the other very best recruits in West Virginia.

Cottrell is an elite prospect who will join a team loaded with some of the most talented prospects in the entire country.  If Cottrell could bring one or more of his future teammates to Morgantown, Bob Huggins could be well on his way to his most successful recruiting class in his long and illustrious career.