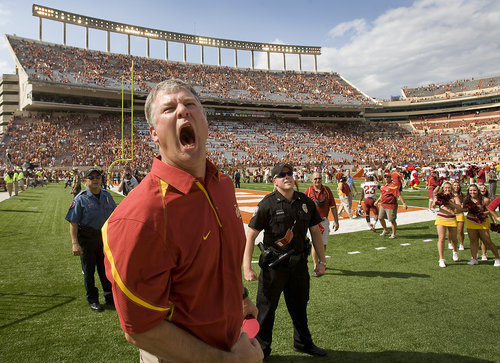 Not to bring up bad memories, but what a horrible coincidence.
Check it out:

West Virginia was No. 2 in the polls and needed only to defeat a bad Pitt team to advance to the national championship game, which almost everyone felt they would win.

On this day, though, Rhoads devised a scheme that stopped the Mountaineers — dare we use the word “cold” — and a four-touchdown underdog Pitt team won 13-9.

White was knocked out of the game for two quarters with a head injury and finished with 14 carries for 41 yards. Slaton had nine carries for 11 yards.

In the previous two games that season, White and Slaton had combined for 831 rushing yards.

Rhoads dared WVU to throw deep down the middle. Mountaineers coach Rich Rodriguez refused to accept the dare, WVU didn’t get its shot at a national title, and Rodriguez left for Michigan.

Had WVU won that game and won a national title, it might be playing in the ACC instead of Pitt — with Rodriguez still its coach.