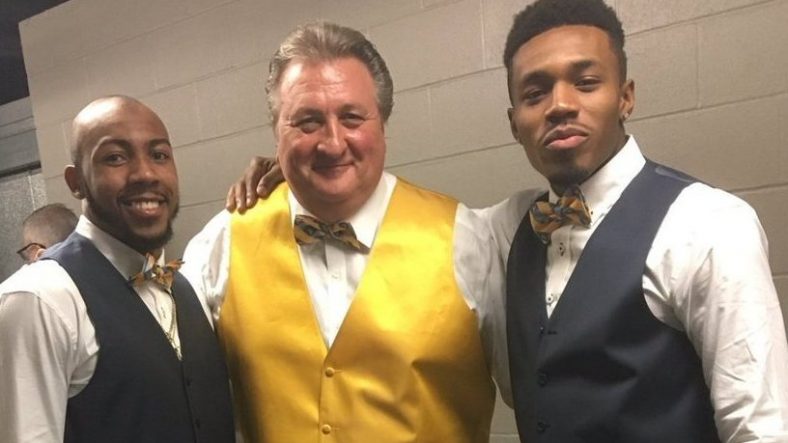 In a move that will shock some of Bob Huggins biggest fans, Huggs goes glam for Big 12 media day. He traded in the trademark windbreaker for a vest and bowtie.

Bob Huggins, along with his team, went formal for the media gathering. The gold vest and blue-and-gold bowtie stole the show. Huggins was accompanied by Jevon Carter and Daxter Miles Jr. who were also dressed to impress. They went with dark blue vests instead of the gold that Huggins went with.

Lots of talk among the schools that the Mountaineers are the "best-dressed" at #Big12MBB Media Day. #unanimous pic.twitter.com/1NclahjCYf

The other players at the event paled in comparison to the Mountaineers. He went for a simple polo with the school logo on it.

“I just didn’t want to come in here the same way we came in last year, just with the regular West Virginia polo on,” Carter humbly bragged. “I just wanted to throw a little spice to it.”

Carter claims that he didn’t talk to Coach Huggins about doing this beforehand.

“It was my idea,” Carter said. “I didn’t know what [Huggins] was going to wear. This was just me and Dax. We didn’t talk to him about it.”

Despite the positive reception of his look, don’t look for this to happen this season for Huggins during a game. When asked if that was a possibility Huggins replied, “Absolutely not.”