Huggins Gets His Guy, Five-Star Big Man Commits to WVU 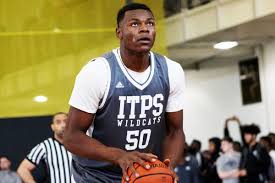 Five-Star big man Oscar Tshiebwe of Kennedy Catholic has committed to WVU. The coveted big man chose the Mountaineers over Kentucky, Illinois and Baylor. He made official visits to each of these colleges.

West Virginia was in on Tshiebwe since the beginning. The Mountaineers were the first program to offer him. They discovered him while visiting former Mountaineer Maciej Bender.

Ever since discovering Tshiebwe, he has been the main target of the 2019 class. During that time the native of Congo has made several visits to the campus and became a fixture in Morgantown.

This is the type of recruits Mountaineer fans visioned when Bob Huggins took over the Mountaineer program. A bruiser under the basket that fits the mold of Huggins’ old Cincinnati Bearcat teams.