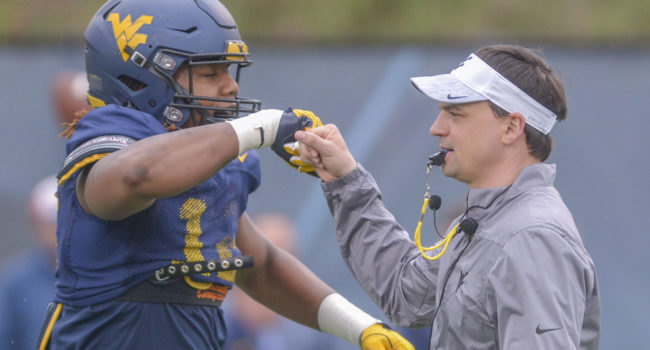 Reports out of Morgantown are that the West Virginia opener against James Madison is a sell out.

The fans and the state are excited to see the Neal Brown era begin.

How else to explain a sell out for a team picked eighth in the preseason Big 12 Conference pool – with a win expectation around five – playing an FCS school?

The excitement is more than palpable. It’s far too early to tell if it’s justified.

(Re)building a college football program takes time. And while it’s not like Brown is taking over one of the dregs of college football, the program has certainly seen better rosters than the particular subset Brown inherits.

Reasonable Mountaineers fans seem to understand that 2019 is going to be, at best, a mediocre season, and, at worst, one of the uglier ones in recent memory. That’s good. Because Brown is going to need the patience. Last year was the all-in season for WVU. Now the chip stack is low and scattered.

But even accepting that it takes time for a coach to build and establish his program, fans can look for signs as to how Brown’s efforts are working., Those signs aren’t necessarily 2019 (or even 2020) wins and losses. They’re more subtle clues that Brown has things going in the right (or wrong) direction.

IF THERE IS A QUARTERBACK CAROUSEL, DOES IT STOP BEFORE HALLOWEEN

With the news earlier this month that Bowling Green transfer Jarret Doege is immediately eligible, the Mountaineers had a situation where they had four quarterbacks vying for a starting spot. If the old football adage is if you have two starting quarterbacks you have none, what does having four mean? Safe to say it doesn’t mean WVU has four starting-caliber signal callers.

Brown announced that Oklahoma transfer Austin Kendall will start the opener against JMU. That seemed like the most likely outcome once Kendall announced his desire to join Brown in Morgantown. But neither Kendall, fourth year junior Jack Allison, redshirt freshman Trey Lowe nor Doege established enough of a separation from the pack in the spring or most of the summer for Brown to definitively tab one as the man until late in camp.

The fact that the quarterbacks appear so close makes it likely that at least some rotating will happen. That’s especially true considering the difficulty WVU faces with an inexperienced line and receiving corp and a tough schedule. Expect to see at least two, and possibly all four, of those quarterbacks get meaningful snaps this year. Game action is the best and often only accurate way to judge a quarterback (think how differently Allison is thought of after his Camping World Bowl performance compared to before).

But where we can get some semblance of how skilled Brown is at developing quarterbacks might come from the ultimate conclusion to this likely quarterback musical chairs. Even if all four QBs are inadequately talented to start in the Big 12 (a distinct possibility), a coach adept at judging and developing quarterbacks will be able to, over the course of three-fourths of a season, find his guy.

WVU’s 2021 starting quarterback probably isn’t on this roster. But the 2020 one likely is. By early November, Brown and Mountaineers fans should know definitively who that is.

As we’ve established, the Mountaineers are going to suffer significant losses this year. When they go to Norman in mid October, they are going to get crushed. That’s just the fact of talent-differential life. In 2019 Oklahoma is at a different level than WVU. The teams played toe to toe last year in Morgantown. There won’t be a repeat this. The repeat will be of 2018.

But, if Brown has things going the way we think he’s going to, there will be a ranked team, maybe highly ranked, whom the Mountaineers come out and play toe to toe. Maybe it’s Texas. Maybe Iowa State. Both are ranked and both games are at home. Maybe it’s another game. But if Brown is the coach most believe, there will be a game where he has the team up and ready to compete for 60 minutes against a really good team. Maybe the Mountaineers go all the way and shock the world with a win that day. Maybe they fall just short. But either way it’s evidence of a coach who has a program that, one day, will win those games with regularity.

THE KEYSTONE COPS ACT EITHER IS NON EXISTENT OR FADES

One of the bigger criticisms of former coach Dana Holgorgen was that his teams were sloppy. Whether it was penalties (too many), clock management (too often chaotic) or turnovers (again, too many), during Holgorsen’s tenure, WVU was known for playing hard but not smart. Brown’s team will likely have some of that hangover. Rome wasn’t built in a day and all that.

Where we can judge Brown is do these issues become less prevalent as the season progresses. If the Mountaineers are making the same and the same number of mistakes in November they were in September, that isn’t a good sign. If the team looks crisper and more disciplined as the season goes on, good things should be coming for Brown’s teams in the future.

IT’S NOT ABOUT THE WINS AND LOSSES

Very rarely in big time sports can you say that. It applies to Brown and the 2019 West Virginia Mountaineers football season. Brown will enjoy a honeymoon period with the fan base and alumni. His personality will extend that period. Eventually though, Brown, like all coaches, will be judged on wins and losses.

Just not this year.