Houston Quarterback D’Eriq King Will Redshirt and Stay in Houston, Clearing the Way for Logan Holgorsen to Start 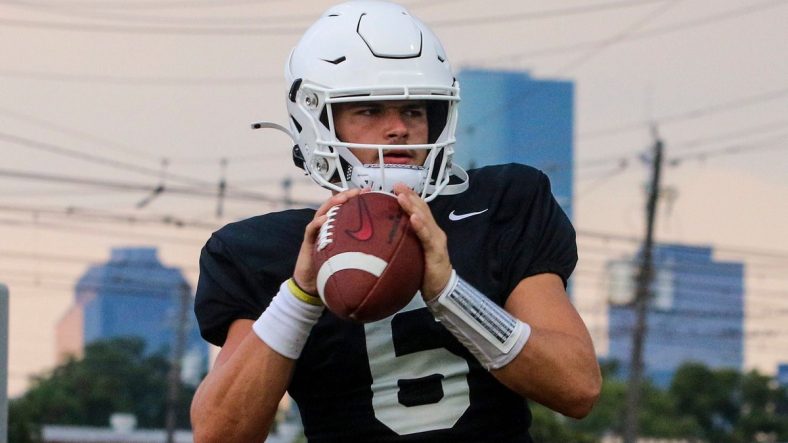 It was reported by The Houston Chronicle that Houston quarterback D’Eriq King would be interesting the transfer portal after the first four games of playing for new head coach Dana Holgorsen.

Now a report has surfaced that King will stay in Houston after all. He is going to sit out the rest of the 2019 season as a redshirt and play in Houston for the 2020 season.

“I came here to play football for the University of Houston and that is not changing,” King said in a statement. “After carefully thinking through this process with my family and coach Holgorsen, I have decided the opportunity to redshirt this season gives me the best chance to develop as a player, earn my degree and set me up for the best success in the future. I’m looking forward to being part of the success of this program going forward.”

King’s father, Eric, was hoping his son would leave the program instead of taking a redshirt and returning. He also talked about the process his son went through a little bit.

Eric King, father of QB D'Eriq King, confirms his son is leaving @UHCougarFB & transfer: "It's the best decision for him at this point. Very, very tough (decision). He's got a lot of teammates riding on him. Sometimes you got to be a little self-centered & do what's best for u"

King has been the star of an underachieving Houston team. They are 1-3 and have lost to Oklahoma, Washington State and Tulane.

It’s not yet been made clear who the starting quarterback will be moving forward, but Dana Holgorsen’s son, Logan Holgorsen, is the only other quarterback who has a pass attempt this season.

Despite Logan being the only quarterback to throw a pass besides King, Clayton Tune has been listed as No. 2 on the depth chart for the Cougars. Tune has made it known he is looking to redshirt this season. That leaves Logan and Ike Ogbogu as the only two other quarterbacks on the roster.

What an interesting turn of events in Houston. Despite King sticking around, this gives Logan Holgorsen the chance to take some snaps at quarterback with his dad calling the plays. Could Holgorsen really pull the bold move of starting his true freshman son at quarterback in his first year at a job? Time will tell.