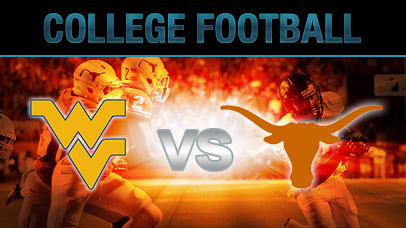 I don’t know if you have heard, but there is a college football showdown scheduled for 3:30 p.m. EST on Saturday in Austin. West Virginia pays Texas a visit.

The Longhorns are feeling good about their chances. Good enough to where the Hook ‘Em Headlines listed five reasons why the Longhorns will take down the Mountaineers.

Well, we’re feeling good about our chances as well. So we are going to respond to their five reasons and give a rebuttal for all five of them.

5. Forcing Will Grier into some turnovers

Must admit, this is Grier’s weakness. He has a tendency to turn the ball over. HEH points out that Grier threw five picks in games against very underwhelming opponents Kansas and Kansas State.

That said, Grier only had one pick against Baylor. The offense is on the right track and Grier is going to distribute the ball to his stud receivers without turning the ball over.

Last season Grier missed the chance to take on the Horns due to injury, so he’s ready to make up for that.

This sounds like a reason FOR West Virginia to win. Texas has given up major passing yardage to much lesser passing attacks than West Virginia. Grier is going to dice these fools up and pile up big-time yardage and touchdowns.

While Dana Holgorsen and Jake Spavital would love to get the ground game going, it is not a must. Baylor shut down the ground game early against West Virginia and look how far that got them. WVU can only hope that Texas is worried about stopping the run, leaving the quartet of Mountaineer receivers more room to roam.

West Virginia will use the pass to set up the run, much like against Baylor. Look for Spavital to sprinkle in some jet sweeps and draws once Texas starts backing up from the line due to Grier gashing them with passes down the field.

While Ehlinger was able to avoid key mistakes against Oklahoma State, West Virginia has a much better defense. A defense that is led by Butkus Award semifinalist David Long Jr. The Stills brothers along with Kenny Bigelow will put pressure on Ehlinger, forcing him into bad decisions. Kenny Robinson, Dravon Henry, Keith Washington and the rest of the ballhawking Mountaineer secondary will be fighting for who gets to put on the turnover helmet first.

Toyous Avery (@__krit) was too hyped to wear the turnover helmet #WVU pic.twitter.com/a1dqrNmXsG

1. Line of scrimmage dominated by the Longhorns

Normally a national power like Texas will be much stronger at the point of attack. That is not the case with this year’s team. Look for the two to be pretty even at the line of scrimmage.

After taking on Texas last year with Chris Chugonov at quarterback, the Mountaineers are dying to get revenge on the Horns. Despite this, they stayed focused on the task of Baylor and destroyed them last Thursday. Meanwhile the Longhorns were looking ahead and suffered a devastating loss to the Oklahoma State Cowboys.

Look for the Mountaineers to score at will on Texas, while the defense makes enough plays to help WVU get the win.