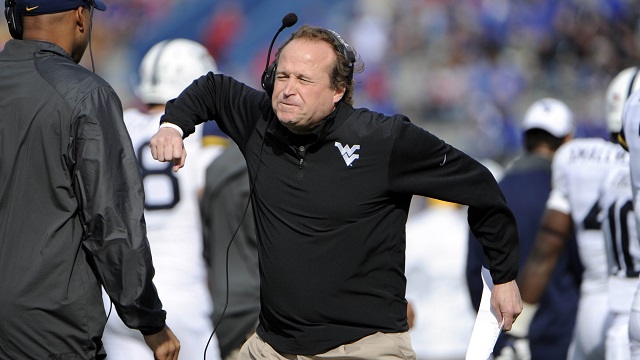 Losses are tough to take no matter the circumstances. Coach Dana Holgorsen’s losing streak against ranked team reaches 9 after the loss to TCU. This has many WVU fans irritated about Holgorsen. It’s important to remember that Dana isn’t the only WVU coach to struggle with ranked teams.

So no WVU coach in the last 37 years has had a winning record against ranked teams.

The Mountaineer defense did a great job of shutting down TCU QB Treyvone Boykin, holding him to 166 yards passing. Unfortunately one of those passes was a 40 yard pass that put the Horned Frogs in range for a game winning field goal. The final score was 31-30.

Oklahoma stormed out to a 24-7 halftime lead. WVU fought back to 27-24. Unfortunately after that Skyler Howard melted down with a fumble returned for a touchdown followed by consecutive interceptions. The Sooners won by a final score of 44-24.

WVU hung tough for a while, trailing only 27 to 27 at halftime. At this time Baylor had a devastating offense and they rode it to a 62-38 win.

Not a good trip to Fort Worth. Treyvone Boykin was so good even Dana Holgorsen high fived him. The final score was 40-10.

The Mountaineers were fired up for this one and came out and got absolutely destroyed. It was over from the start as Oklahoma rolled, 56-28. WVU was able to post some big rushing stats, but did it really matter?

The season opener at FedEx Field was another close but no cigar effort from the Mountaineers. WVU was able to pile up yards but in the end came up short on a late drive with the final score being 31-24.

When will the streak end? There will be more opportunities for the Mountaineers in 2017.