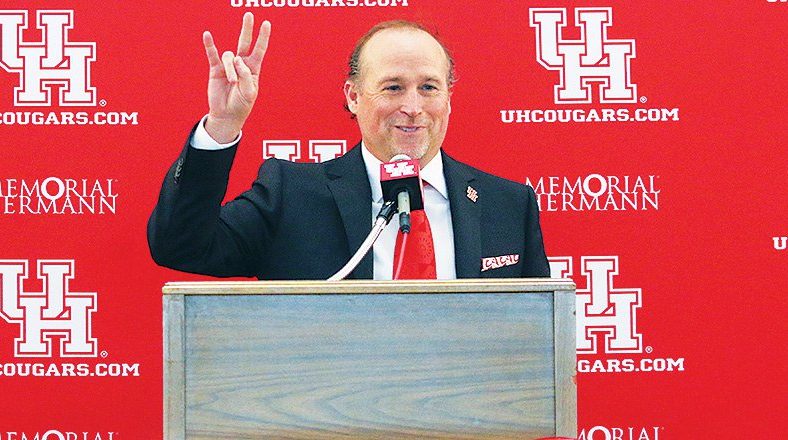 Dana Holgorsen, the former West Virginia Head Coach and current Houston Head Coach, made some bold claims at a rally for Houston Cougars fans.  When Holgorsen bolted Morgantown for Houston back in January, he claimed that Houston had tremendous upside and could contend for future championships.

Recently, Holgorsen reiterated this, saying, “We have big expectations and we embrace those expectations.  Our job is to bring championships.”  Holgorsen, sensing he needed to further excite the Houston fanbase, added, “We start in Norman, Oklahoma and we can’t wait to go up there and play those guys and bring back a victory.  There’s no question about that.”

Dana Holgorsen at @UHCougarFB annual preseason rally, Cage Rage, at TDECU Stadium: "We start in Norman, Oklahoma and we can't wait to go up there and play those guys and bring back a victory. There's no question about that." pic.twitter.com/VMOuPrt9sc

Houston travels to Norman to play the #4 ranked Sooners next Sunday, September 1st.  Houston is currently a 25 point underdog in the game and Oklahoma has only lost one home opener this century when they lost to TCU back in 2005.  Making a upset win in Norman even more challenging, the Big 12 power Oklahoma Sooners feature Transfer Senior Jalen Hurts at quarterback.  He previously went 26-2 as a starter for the Alabama Crimson Tide.

Holgorsen went on to say, “Game 3 we have Washington State and we know that will be a tough game and that’s another top 20 victory that we can get.  Then we have Cincinnati here, Memphis here, then SMU here and Navy here and with your support we can win all of those games and win a championship.”

While Neal Brown and WVU have very modest expectations for the upcoming season, Holgorsen appears to be shooting for the stars in his initial season with Houston.  Good luck, Dana!