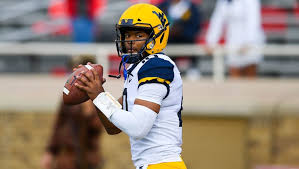 There has been a lot of smoke surrounding Trey Lowe possibly entering the Transfer Portal.  When there’s smoke, there’s typically fire.  That is not the case here.

Trey Lowe, all 6 foot 3 inches and 220 pounds of him, is on a mission.  Baseball is fun for him, a hobby, a way to stay active in the Spring/Summer.  Football is his life.    Since the final game of last season, where he played sparingly in the Camping World Bowl game loss to Syracuse, completing 2-2 passes for 0 yards.  Jack Allison was clearly being groomed by the previous coach to be this season’s starter and Lowe was likely going to back him up.

This year is an entirely different story.  Enter Neal Brown and Austin Kendall.  Lowe’s path to winning the starting job got extra challenging.  Although the Brown hiring is what’s good for the West Virginia football program, it is disadvantageous for Lowe, an unfavorable circumstance towards his ultimate goal of leading the Mountaineers this season.

If Holgorsen stayed, Jack Allison would have been the starter.  100%. However, Allison struggling early would have led to a real opportunity for Lowe.  A Jack Allison injury would have created an Adam Bednarik/Pat White situation, where the more talented player, the backup, would be given the chance to play after an injury to the starter.

Remember, Bednarik replaced Rasheed Marshall as the starter in 2005 and Pat White was the backup.  Bednarik was injured during the Louisville game in 2005.  West Virginia was dead in the water and had no chance of coming back. Down 24-7 with 11 minutes and 20 seconds left in the game, Pat White entered the game for the injured Bednarik.  WVU scored 17 unanswered points and sent the game to overtime, where the Mountaineers ultimately won 46-44 in one of the most exciting comebacks in West Virginia sports history.

Trey Lowe just needs a chance.  He has put in the work in the offseason and he is ready.  Lowe trained at the QB Country in Memphis, a facility for training and developing some of the top quarterbacks in middle school, high school and college.  QB Country tweeted, “Trey Lowe has never looked better and he’s in baseball season.  Kid is dialed in!  Just wants to work and get better.  Go get em 10!”

WVU QB @treylowe10 has never looked better, and he’s in baseball season.
Kid is dialed in! Just wants to work and get better. Go get em 10! pic.twitter.com/RknTesf0ri

Lowe is the most physically gifted quarterback on the roster, a true dual threat athlete that can beat opposing defenses in multiple ways.  Whether Lowe earns the job as the starter at the start of the season, or he has to let fate take over like Pat White did back in 2005 to get his chance, Trey Lowe will be the starter at West Virginia University one day and, like White, he will be outstanding.  In the meantime, he’s going to work to be ready for when his opportunity presents itself.