He’s Been Compared to Tavon Austin, now can he live up to the hype? 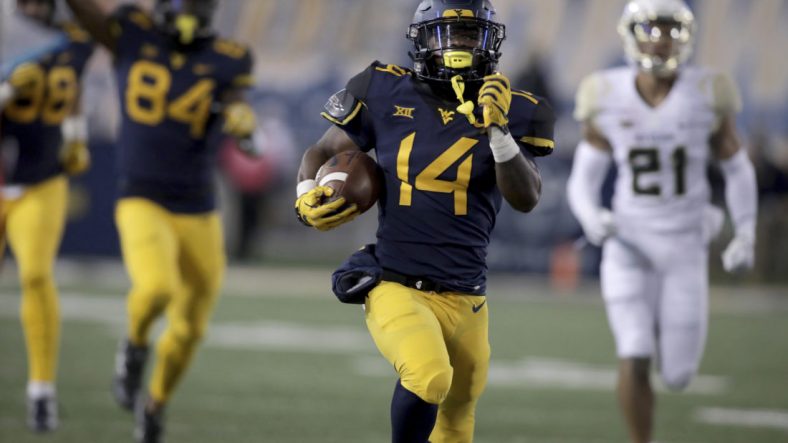 West Virginia running back Tevin Bush (14) runs for a touchdown during the first half of an NCAA college football game against Baylor, Thursday, Oct. 25, 2018, in Morgantown, W.Va. (AP Photo/Raymond Thompson)

Call him a receiver. Call him a running back. Whatever you call him, Tevin Bush is an athlete.

The five-foot-six, 165 pound junior out of New Orleans, Louisiana has been compared to the elite Tavon Austin. Bush, who’s three inches shorter and about 10 pounds lighter than Austin, said soon after committing to WVU in 2016 that the comparison was “great… but I’ll have to live up to his [Austin’s] standards and only time will tell.”

The comparison comes from Bush’s style of play. At Landry-Walker High School, Bush was utilized as a running back, slot receiver and kick returner. West Virginia’s spread attack, which emphasizes getting the ball to the quickest players, is one aspect that really drew Bush to WVU. While differences exist between Holgorsen and new coach Neal Brown’s offense, they both follow an air-raid format.

Having finished with over 2,500 all-purpose yards and 29 touchdowns at Landry-Walker High, Bush earned a three-star rating and was ranked the 67th best athlete nationally by ESPN. With such a high recruiting stock, Bush received offers from multiple Division I schools but chose West Virginia mainly because of their play style.

Bush has seen steady improvement in his first two seasons as a Mountaineer. He went from seeing action in nine games in 2017 (as a freshman) to playing in 11 games in 2018. His receiving production jumped significantly, going from four catches for 15 yards as a freshman to 14 catches for 209 yards and a touchdown as a sophomore. The increase had to do with his move from running back to inside receiver in the offseason prior to 2018. Even still, it was a significant jump in overall production and he ran the ball six times for 103 yards, averaging nine yards a carry with a long of 79 yards.

Bush has the potential to be explosive, dominant and productive in his final two seasons as a Mountaineer. With a young receiving corp., Bush can help carry the load offensively in 2019. Coach Brown and company can utilize Bush similarly to how Spavital and Holgorsen used him as an underclassman. A mix of handoffs and pass-targets stands to be most applicable to Bush’s game, especially focusing on using Bush like WVU used Austin nearly a decade ago (e.g., end-around/jet-sweep, touch-pass, screens, middle-field targets, etc.).

“He’s a guy that I’ve been impressed with through four (practices),” said Coach Brown about Bush in late March, “He competes, loves to play, he’s made a ton of big plays.” Bush ended up performing well in the spring game when the ball came his way.

Though similar in play style and speed, he doesn’t have to be the next Tavon Austin because he’s the first Tevin Bush. We hope to seem him continue to progress and help lead this young squad.