Healthy Will Grier Ready to Take On Texas 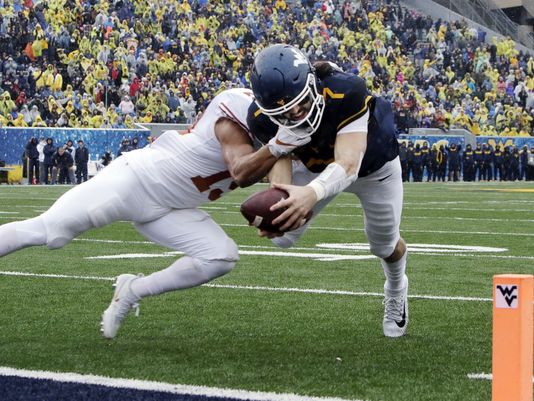 Just under a year ago West Virginia quarterback Will Grier was leading to a touchdown drive against the Texas Longhorns. On a play initially ruled as a touchdown, Will Grier suffered a broken middle finger. After a review, the ruling was changed to a touchback and for all intents and purposes, the Mountaineer season was over.

Grier is able to take a look back at the moment and laugh.

At that point the Mountaineers were 7-3 and still in contention for the Big 12 Championship. After the Grier injury, West Virginia lost to Texas 28-14, to Oklahoma 59-31 and then suffered an embarrassing loss to Utah in the Zaxby’s Heart of Dallas Bowl by a score of 30-14.

Well now it’s 2018 and the Chris Chugunov era is over. Chris has since transferred to Ohio State (don’t ask me how that transpired) and West Virginia’s star quarterback is healthy again.

As long as Grier protects the ball and himself, the Mountaineer offense should be able to roll against this Texas defense. This Texas defense has already given up 38 points to Oklahoma State, 45 to Oklahoma and 34 to Maryland. It will be no different for Will Grier and the boys piling up yards and points in Austin.

This is going to be your typical Big 12 shootout. While Texas does have the home field advantage, West Virginia has the quarterback and wide receiver advantage. Sam Ehlinger is a more than capable quarterback, but he isn’t Will Grier. Look for the Mountaineers to outscore the Longhorns in Austin, pushing West Virginia back into the top ten and keep them alive in their quest for the College Football Playoff.