Heads or Tails? Geno Smith at the Center of Monday Night Football Controversy 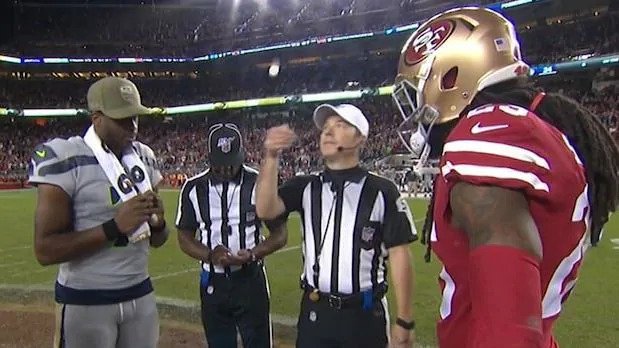 Former Mountaineer quarterback Geno Smith found himself playing a big role in the NFL news cycle Tuesday despite not taking a snap in the Monday Night Football showdown between the Seattle Seahawks and San Francisco 49ers.

After the 49ers tied the game at 21 and send it to overtime, Seahawks head coach Pete Carroll sent out backup quarterback to the call the coin toss for overtime. Russell Wilson must have wanted to take a water break instead of going out and facing his old teammate Richard Sherman.

There was controversy regarding whether Geno Smith called heads or tails. It’s pretty evenly split as to whether he said heads or tails. To me, it sounds like he says tails, but the ref announces it as heads and Geno has no issue with it. Maybe that’s because he won the toss.

Regardless of what he called, Geno Smith got the job done and went out and won the all-important overtime coin toss.

This isn’t the first time there has been controversy like this in the NFL.

Despite not getting much playing time, Geno Smith resurfaces once in a while to be part of a big NFL story. Remember when he was the quarterback that started and broke the consecutive starts streak by Eli Manning.

Even though Geno did not live up to what the Jets hope he did when they drafted him, he has carved out a successful career as an NFL backup quarterback.