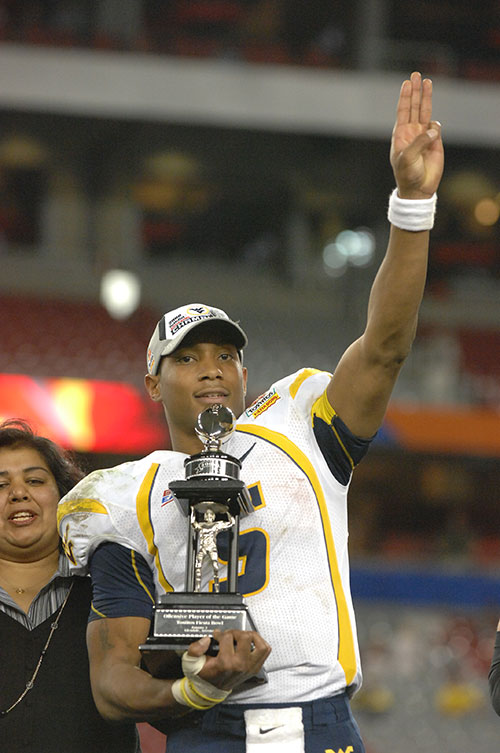 It’s hard to believe, but Pat White turned 33 today!  Now the Quarterbacks coach at Alcorn State, White is one of West Virginia football’s greatest players ever and the only quarterback in NCAA history to start in four bowl wins, two of which were BCS victories.

White finished his college career  passing for 6,051 yards and 56 touchdowns.  He also ran for 4,480 yards and 47 touchdowns.  At the end of his collegiate career, he held the FBS record for rushing yards by a quarterback before being passed by Denard Robinson of Michigan.

Although scouts didn’t believe that his skill set translated to the NFL, he would have clearly been a tremendous success if given a real opportunity.  NFL scouts are the worst.  Are there a collective group of people that gets more wrong more often than NFL Scouts?  And their concerted obsession with tall, white quarterbacks is obnoxious.  Here are some (unwarranted) perceived weaknesses of Pat White when he entered the NFL draft:

“Lacks prototypical quarterback size and is not strong enough to take a lot of hits.”  Nothing in his collegiate career suggested this.

“Needs to prove he has the hands to play in the slot as a receiver.”  Why?

“Lacks patience in the pocket, and will take off too soon and misses open targets.”  Or will leave the pocket and run for a 50 yard touchdown.

“Delivery is stiff and mechanical.”  “Ball comes out of his hand poorly at times.”  Blah, blah, blah.

None of that should have mattered.  Pat White is a winner.  He was 42-9 in his collegiate career.  His leadership and competitiveness on the field were unrivaled by any player in West Virginia University football history.  Happy Birthday to a true Mountaineer and one of the best to ever play the game.