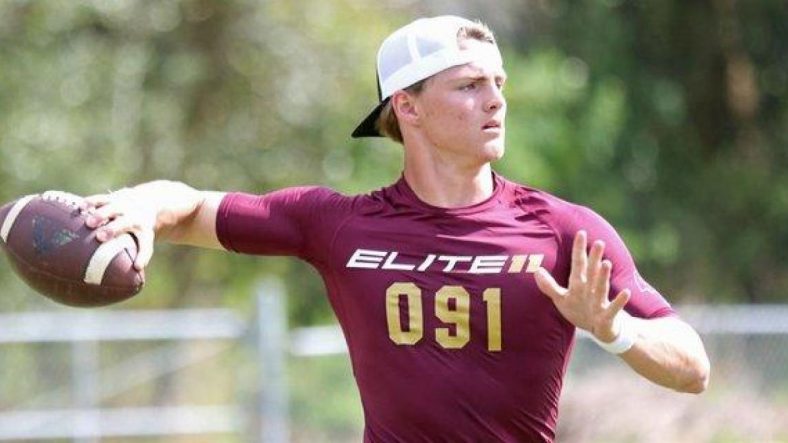 The Elite 11, the nation’s premier quarterback competition, is underway in Frisco, Texas, featuring 12-24 of the most talented quarterbacks in high school football.  This year, there are 20 quarterbacks competing and West Virginia 2020 commit Garrett Greene made the Finals roster.

Greene, a 4 star quarterback from Tallahassee, Florida, earned his way into The Elite 11 with an impressive performance at the Rivals Camp Series Stop in Tampa where he won the MVP.

So far, Greene hasn’t disappointed at the Finals.  According to Barton Simmons, CBS Sports College Football National Writer and Director of Scouting at 247 Sports, Greene “looked sharp and accurate on everything short and and intermediate and he was good throwing outside the pocket with accuracy.”

Mountaineer Sports spoke with Garrett following his first day at The Elite 11 and the perfectionist Greene wasn’t thrilled with his performance, telling us, “It went well today.  I felt like I threw the ball pretty good, but there were some throws during my Pro Day that I would like to have back.”

West Virginia commit @garrett3greene with a strike at the Elite 11! pic.twitter.com/JhVJTO2mD4

Others weighed in and said the following, “The ball comes out of his hand hot, really impressive start.  Very fluid passer mechanically.  Deep balls a big short and underthrown.  Best when he can throw it on a line.  Started hot but a bit up and down towards the end.  Had some highlight throws.”  Overall, scouts seem very impressed by his performance so far.

#WVU QB commit Garrett Greene just threw a dime for a TD here at the #Elite11. Hell of an arm on that young man. @rivalskeenan