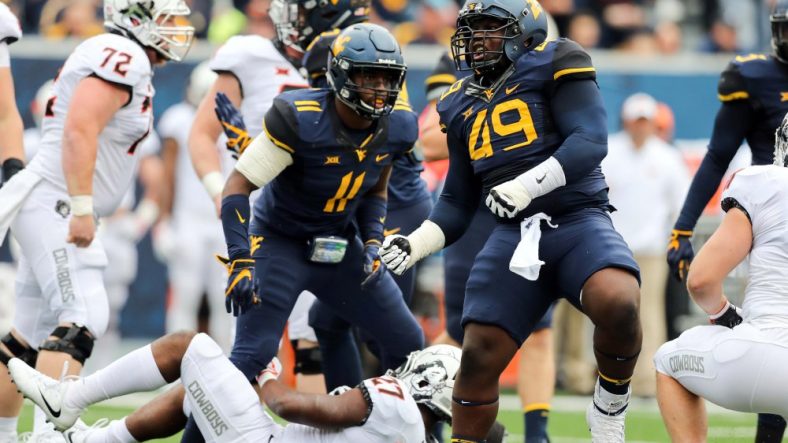 An area of weakness, the defensive line, is getting even weaker. In a surprise move, freshman All-American defensive lineman Lamonte McDougle is leaving the team, according to Allan Taylor of MetroNews.

McDougle is looking to move to a program where he can get more sacks. While playing nose guard in West Virginia’s three-man front his role was more to take up blockers and allow others to make plays.

According to the report, the Mountaineer coaching staff was shocked when they were informed of McDougle’s decision upon his return from spring break. According to NCAA rules he has to sit out the 2018 season at any FBS school.

He was not practicing this spring as he was recovering from an injury suffered in the offseason. In February defensive coordinator Tony Gibson said he is only working with five scholarship players on the defensive line. Now they get even thinner on the d-line.

With the sudden transfer of starting NT and Freshman All-American Lamonte McDougle, along with the earlier transfers of Jalen Harvey and starting DE Adam Shuler, WVU is down to FOUR scholarship defensive lineman.

ESPN and 247Sports named McDougle a Freshman All-American in 2017. His statistics for the season included 23 tackles, 4 for loss and two sacks in the 11 games he played.

There have been several Mountaineers leave the program this offseason. These include backups QB Chris Chugunov, fellow defensive linemen Adam Shuler and Jaleel Fields and wide receiver Ricky Rogers.

With the mass exodus of defensive linemen, it is extremely important for incoming four-star freshman Dante Stills to come in and contribute right away. ESPN already named Stills West Virginia’s most important freshman and this only highlights that statement.