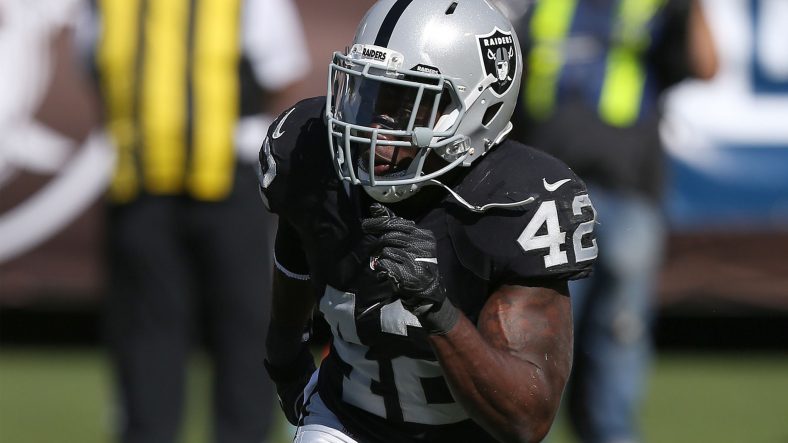 There has been a certain hard-hitting former Mountaineer safety languishing away in Oakland for too long. It’s time to free Karl Joseph. We already reported on Karl Joseph not getting a fair shake in Oakland. It’s officially time for both parties to move on.

Joseph was drafted by the Oakland Raiders in the first round with the 14th overall pick. Many draft experts projected him to go in the second or third round. For better or worse, the Raiders have never done things the way the experts project.

One would assume that since the Raiders drafted Joseph so high they would be committed to getting him on the field. Battling a mixture of injuries and the coaching staff not believing in him, he had a hard time getting on the field and staying there. He played in 12 games, starting nine. According to Pro Football Focus, he had an overall grade of 75.5, which ranked him 50th among qualifying safeties.

In 2015 Joseph played in 15 games and started all 15 of them. He had 79 tackles, four pass deflections, a pick and a sack. During this season PFF gave him an overall grade of 80.8, ranking him 35th among safeties for the season.

Then there was the 2018 season. In the eyes of many this was a breakout season, including Pro Football Focus. In fact, this was one of the best seasons by a defensive player on the Raiders in years. Check out this graphic that goes back to 2006:

Despite this breakout season, the Raiders declined the fifth year option of his rookie deal. This is a good sign the team wants to move in a new direction. Raiders coach Jon Gruden defended the move.

“Yes, yes we did,” Gruden said when asked about declining the option. “It’s a big story for some people, but that does not mean that we do not want Karl with us and in the future. All that means is that we didn’t exercise the fifth-year option. If you really study the fifth-year option and what it entails, it entails a lot. It does not mean, by any means, that we do not want Karl Joseph as a captain or as a leader on this team, now or in the future.”

After declining the option the Raiders still weren’t done. They drafted hard-hitting safety Jonathan Abram out of Mississippi State. A safety who can lay the wood who is very athletic. With the pick it seems the Raiders view Abram as a better version of Joseph.

Then there was the offseason free agent signing of Lamarcus Joyner, another safety. The Raiders signed him to a $42 million deal over four years.

You don’t pay that kind of money and use first round draft picks for players to sit on the bench. Sure, Joseph was a first round pick, but that was before the Gruden regime took over. It’s pretty clear Gruden has never seen the former Mountaineer as a part of their long term plans.

Since Gruden clearly wasn’t satisfied with Joseph’s play during the 2018 season, why not trade him and be done with it. While he’s not going to bring back a first round pick, the Raiders could likely get a fourth round pick and not pay first round money to a bench player.

It’s time, Jon Gruden. Free Karl Joseph. He’s been held hostage their for four season and it’s time to get him on a team that will allow him to succeed. Both parties can move on and be better because of it.