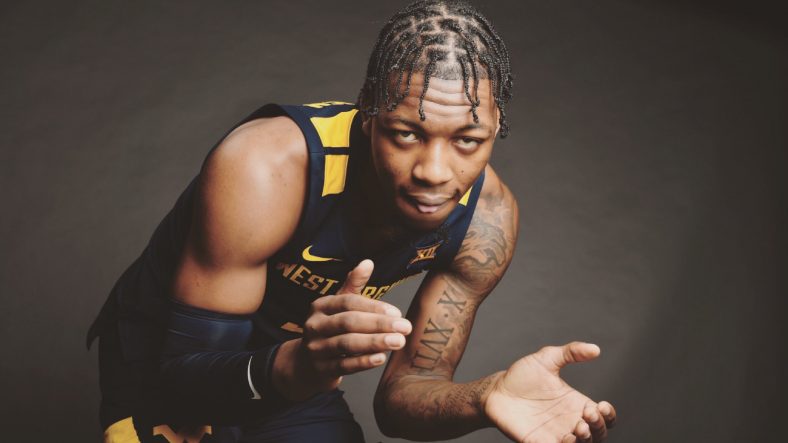 Gabe Osabuohien, the 6’8 Power Forward from Toronto, Canada, transferred to West Virginia back in August.  Osabuohien was dismissed from the Arkansas basketball team and the team released a statement on Osabuohien, saying, “We have set a level of expectations for our student-athletes on and off the court.  After discussions with Gabe, it was decided that it would be best to part ways. We thank him for his time at Arkansas and wish him well.”

Osabuohien quickly found his new home after being dismissed and released the following statement on Twitter at the time:  “First of all, I would like to thank God for blessing me more than I deserve and bringing me this far.  I would like to thank my family for their support, the Arkansas Razorback basketball family and also thank Coach Ro Russell, and everyone that has been with me through this tough journey for all their tremendous support both on and off the court. Thank you to all the schools that reached out to me, but weighing all the factors, I am excited to announced that I am committing to West Virginia University where I will continue my academic and basketball career.”

Mountaineer Sports spoke with Osabuohien today and when asked if he’s going to be eligible for the upcoming season, Gabe replied, “I’ll know by Friday.  It’s looking good, though.”

Osabuohien has drawn high praise from West Virginia Basketball Head Coach Bob Huggins, who said the following about the transfer: “I don’t think he’s a wing. I think he’s a 4.  He’s a 4-man who can bounce it. I think he’s a 4-man who passes it pretty well and rebounds it and plays really hard. He plays really hard, and if we can get other guys to figure out how, we can play pressure. I don’t know if we can get back to what we did before, but I think we can at times pressure people. He’s a big who can stay in front of people.”

The NCAA’s decision-making process is often slow and difficult to understand, but it appears that Gabe Osabuohien will be eligible and ready to provide tough defense and rebounding off the bench this season for the Mountaineers.