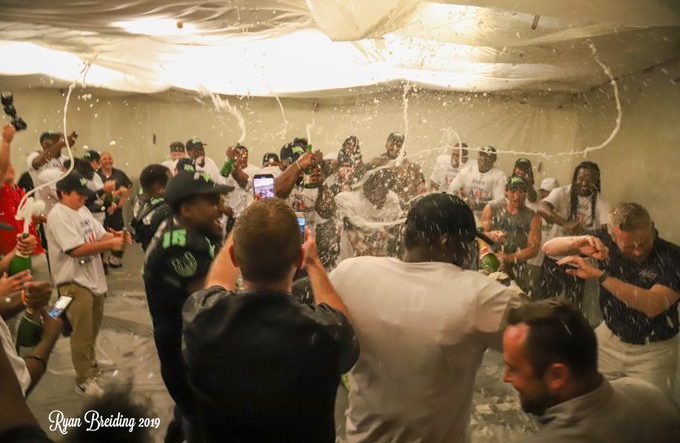 The West Virginia Roughriders went 13-0 and became the American Arena League champions after defeating the Carolina Energy by a final score of 55-29.

The game took place at the WesBanco Arena in wheeling in front of a crowd of approximately 4,500. It was a tough start for the Roughriders. After falling behind 2-0 from a safety when Mountaineer great Noel Devine was tackled in the end zone. Another former Mountaineer, quarterback Jarrett Brown, threw two pick sixes, giving the Energy a 15-0 lead. Both of the interception returns for touchdowns were made by Tony Reid, who played college ball at Miami (OH) University. These happened on back-to-back offensive snaps for the Roughriders.

From there it was all Roughriders. One of the big plays of game was a 24-yard touchdown pass from one Mountaineer to another when Brown found Devine. This put the Roughriders in front with a commanding lead, 42-22.

Brown led the way going 14-of-24 for 157 yards and five touchdown passes. He also had 49 yards on the ground and two scores.

Other Mountaineers on the Roughriders’ roster include defensive backs Robert Sands and Ellis Lankster along with defensive end Larry Ford.