Former Mountaineer Had a Huge Day 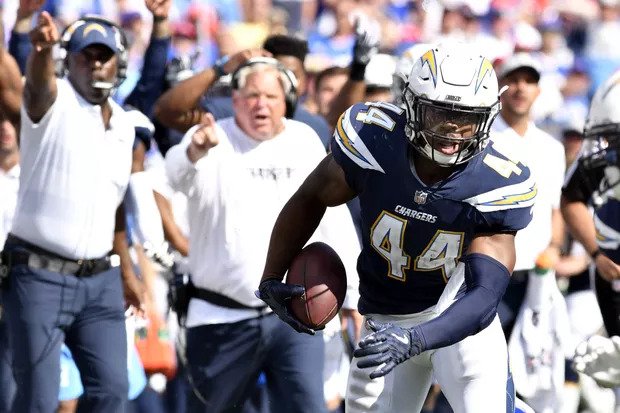 Today the Los Angeles Chargers opened up the season with a win over the Indianapolis Colts. Former Mountaineer Kyzir White was inserted as the starting middle linebacker for the Chargers and he played a big role in the victory.

White had nine tackles, including eight solo stops with one of them being a tackle for loss.

Just before the game, Chargers beat writer Daniel Popper broke the news about White getting the nod to start the game.

Kyzir White officially starting at middle linebacker for the #Chargers.

According to Popper, the Chargers like what the size and speed White brings to the middle of their defense. Per his article at Bolts From the Blue:

The 2018 fourth-round pick brings a size and speed element to the middle of the Chargers defense that frankly no other player on the active roster is able to. This is a potentially exciting development as the Chargers continue their move toward a faster, more athletic defense with the likes of Drue Tranquill, Uchenna Nwosu, Nasir Adderley, Rayshawn Jenkins, and Adrian Phillips.

Kyzir was one of three White brothers who starred at WVU. He was selected in the fourth round with the 119th overall pick by the Los Angeles Chargers.

His younger brother, Ka’Raun White was signed by the Seahawks as an undrafted free agent in 2018 and waived three days later. He was claimed off waivers by the Bengals but waived before the season started. In January 2019 the Steelers signed Ka’Raun to a reserve/future contract, but waived him in May. That was his last NFL contract.

Most Mountaineer fans are probably familiar with older brother Kevin White. His career was completely derailed by injuries. After starring at WVU For two years he was taken seventh overall by the Chicago Bears. After four years in the NFL he only played in 14 games, with 25 receptions for 285 yards. Currently he is a free agent. Many are left to wonder what might have been when it comes to Kevin White in the NFL.

More Articles on Mountaineers in the NFL: