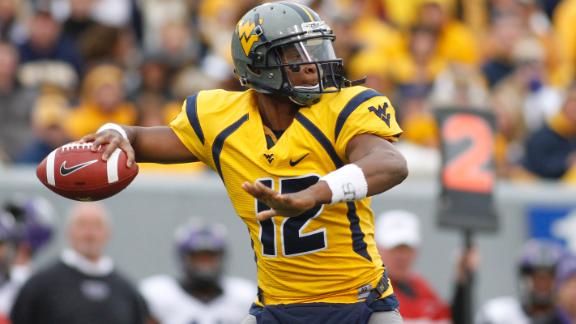 Former Mountaineer Geno Smith has moved on to his next home in the NFL. After a year with the New York Giants Geno is finally getting out of New York and is off to the west coast.

Adam Schefter reported that Smith has signed a one-year deal with the Los Angeles Chargers. He will be battling with former Ohio State Buckeye Cardale Jones to serve as the backup for Phillip Rivers.

Smith was a Mountaineer from 2009 to 2012. His senior year started the West Virginia era in the Big 12 Conference. During his junior year Smith was named First-Team All Big East. He threw for 4,385 yards and 31 touchdowns. He followed it up with an even better senior season, throwing for 4,205 yards and 42 touchdowns during his senior campaign.

The New York Jets drafted Smith in the second round of the 2013 NFL Draft. He spent his first four seasons with the Jets, before joining the Giants for the 2017 season. He was the quarterback who started in place of Eli Manning when his 210-game consecutive start streak was broken. It was Smith’s only start of the season. Geno has appeared in just five NFL games since the 2014 season ended.

I honestly hope Geno Smith is in the NFL forever.

1. He’s always entertaining/surrounded by drama
2. He thinks the earth is flat
3. There will always be a group that believes he’s still an elite QB waiting to emerge and I will always lmao at that

Former Giant Geno Smith signs with the Chargers. I have a feeling Rivers won’t be benched at any time for Geno.

I got a feelin #Chargers are NOT drafting a QB… Hope all u fans that want “win-now” draft picks are happy. I’m not feeling this Geno Smith move. He’s just a hybrid pocket passer with starting experience for cheap. It’s a safe move. Ba-bye Cardale & Celemens. Hope for the best!

The Chargers gave former Giants QB Geno Smith a one year deal to back up Phillip Rivers.

So if you had dreams of Geno Smith taking over from a retired Eli Manning boy is that some bad news for you. #Giants