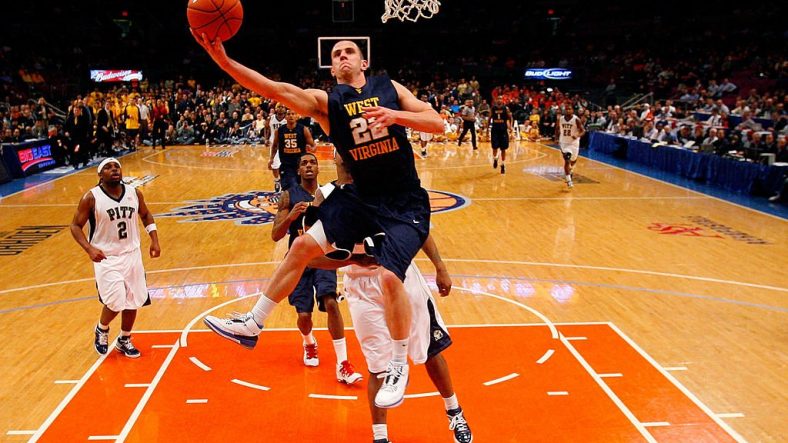 Former Mountaineer Alex Ruoff hasn’t forgotten about the epic win his team had over Duke during the 2008 NCAA Tournament.

Ruoff is currently playing for the Helsinki Seagulls. One of his teammates is former Mountaineer Juwan Staten.

The Seagulls have qualified for the playoffs as a No. 7 seed. In the first round, they will be taking on No. 2 seed Kauhajoki. The thought of a No. 2 vs No. 7 matchup took Ruoff down memory lane. He couldn’t help but take to Twitter and reference his own past experience in this same type of matchup.

Game Day! First round of the playoffs. Last time I was a 7 seed facing off against a 2 seed, Duke got an early vacation. Let’s see what we can do. #ForHisGlory ? #HailWV pic.twitter.com/xSCJAaW7z9

Ruoff’s Mountaineer pride is still strong. All it takes is a quick look at his Twitter profile to realize it:

About that No. 7 against a No. 2 memory Ruoff referenced. How could any Mountaineer fan forget about that game?

What an incredible team it was. They advanced to the Sweet 16 with this win before losing in overtime to Xavier.

The team had four players who averaged double figures, led by Joe Alexander with 16.9 points per game. The other three were Ruoff, Da’Sean Butler and Darris Nichols. Then there was the gritty defense of Joe Mazzulla and Wellington Smith. Speaking of grit, who could forget about Cam Thoroughman? And how awesome is it to see Bob Huggins in a suit?

Ruoff hasn’t forgotten about his Mountaineer teammate Joe Alexander. He recently tweeted some of his highlights and claims that Joe should be in the NBA: