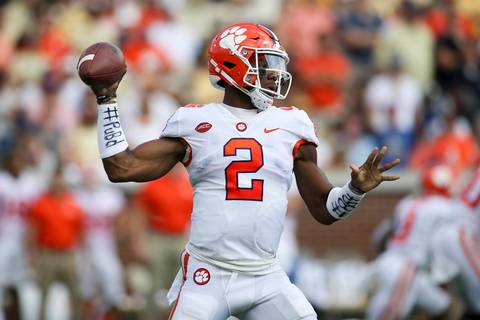 Former Clemson QB Kelly Bryant is looking for the right place to play college football in 2019. It just so happens the Mountaineers will have an opening at the quarterback position next season.

So far Bryant has scheduled visits to North Carolina and Arkansas this weekend and next weekend.

On Saturday October 13 UNC takes on Virginia Tech and Bryant will be in attendance.

On October 20, Bryant will watch Arkansas take on Tulsa.

According to The State, Bryant is also interested in Missiouri, Louisville, Baylor and West Virginia.

For the first games of the season Bryant split time with Lawrence and the Tigers were off to a 4-0 start.

During the 2018 season Bryant took the Tigers to the ACC Championship as well as the College Football Playoff.

In 2019 West Virginia will have plenty of talent returning. One glaring hole in the team will be at quarterback with senior quarterback Will Grier moving out after the season.

Could Dana Holgorsen be able to pull of some transfer magic for a second time to bring a blue chip quarterback to Morgantown? It would really improve the outlook for life post-Will Grier.

It’s fun to speculate and it’s cool to see West Virginia in the running for landing a quarterback with experience getting to the College Football Playoff.