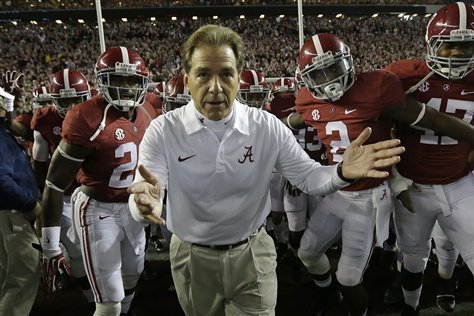 Alabama head coach Nick Saban prepares to lead his team onto the field in the first half of an NCAA college football game against LSU in Tuscaloosa, Ala., Saturday, Nov. 9, 2013. (AP Photo/Dave Martin)

After Alabama lost a close game at home to LSU (46-41), a petition was actually started to fire Alabama Head Coach and West Virginia native Nick Saban.

Saban, in his 13th season in Tuscaloosa, had a 31-game home win streak snapped by LSU and the Alabama fans surprisingly, shockingly put the blame on Nick Saban, who happens to be one of the very best coaches in college football history.

I've spent well over 100k on bama in my lifetime, and through 30 years of being a die hard bams fan, I've never seen anything as atrocious as this team. Everyone was right, we were just playing cupcakes. Time for nick to go. #FireSaban

Saban will obviously remain the Head Coach of the Alabama Crimson Tide for as long as he wants to be, but a petition like this and the fans’ reactions following a tough loss shows just how fickle and unfair fans can be.

Although most West Virginia fans remain loyal to Neal Brown and his “Trust the Climb” motto, many have lost trust in the first year Head Coach at West Virginia who was left with very little talent after former Head Coach Dana Holgorsen left for Houston.

Brown, following a most recent loss to Texas Tech that put the Mountaineers at 3-6 overall, promised West Virginians that the football program will be successful soon and that the product on the field will match the amazing fans of our great state.