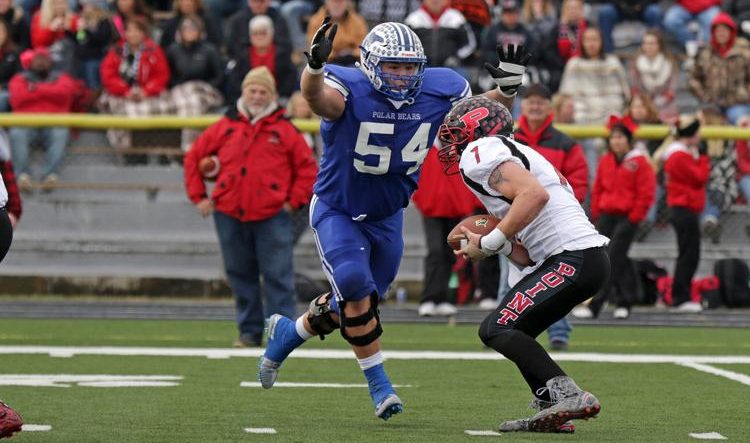 With starting center Chase Behrndt suspended, true freshman Zach Frazier started the season opener against Eastern Kentucky. According to Greg Hunter of Blue Gold News, this was the first time a true freshman started on the Mountaineer offensive line in over 40 years.

Looks like Zach Frazier is going to get the start at center. According to my research he will be the first true freshman offensive lineman to start a game for WVU in at least 40 years. Blaine Scott and Noah Drummond backing up Frazier.

Frazier went to high school at Fairmont Senior and joins a group of former Polar Bears on the Mountaineer roster, including the Stills brothers Darius and Dante as well as redshirt junior linebacker Jake Abbot and redshirt freshman defensive lineman Rhett Heston.

Join us inside the film room to see his dominant game tape against EKU.? @zfrazier54 pic.twitter.com/jiRC8PLjCN

“Our defense is difficult to play against,” Brown said per WV Metro News. “He was partnered up and he went against Darius every day. So we had Fairmont on Fairmont every single day. If we kept score, Darius probably won. But Zach won his fair share. Day after day of going against Darius, I think he got better. So he gained some confidence.

“He was going to play today regardless of the suspensions. He wasn’t going to start. But I thought he handled it really well.”

Brown has placed an emphasis on getting the ground game on track this season. During the television broadcast of the opener, a clip was shown of Brown giving a very stern three-word response when asked if his rushing attack will be better than it was in 2019. “We better be.”

And it was, albeit against lesser competition. West Virginia had two running backs over 100 yards.

Frazier wasn’t the only former Polar Bear seeing their first game action as a Mountaineer. Rhett Heston had a tackle in his first time seeing the field in a Mountaineer uniform.

The pipeline from Fairmont Senior to Morgantown is alive and well.