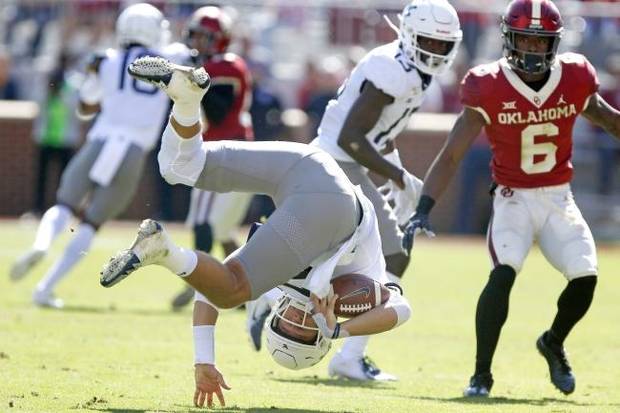 Austin Kendall played a helluva game against his former team, the Oklahoma Sooners.  Although Kendall only finished 15/31 with 182 yards and 2 touchdowns, he didn’t make any major mistakes and he had some key drops on deep throws to Sam James that might have changed the complexion of the game.  He played his ass off and there is no question that he is a warrior.

With that said, Austin Kendall does not give the Mountaineers the best chance of winning.  Head Coach Neal Brown’s play-calling was conservative for most of the game, but to finish with 242 total yards (191 yards passing and 51 yards rushing) is unacceptable, regardless of the talent level discrepancy between the two teams.

West Virginia’s continued struggles on the ground is most disturbing.  The Mountaineers are 126th out of 130 teams in the country in rushing yards, averaging 88.1 yards on the ground per game.  Remember, coming into the season the running back position was considered the most talented, deepest position on the West Virginia roster.

Prior to the start of the season, Neal Brown said that Kennedy McKoy “was sitting on a big year.”  Brown went on say, “He’s gotten stronger over the past six, seven months. He’s patient, he has very few negative runs, he catches out of the backfield, and he’s got a toughness about him that I like.”

McKoy has 188 yards rushing on 66 carries and averages 2.8 yards per run.  Leddie Brown, West Virginia’s ultra-talented, ultra-tough Sophomore running back, has 184 yards on 51 carries and averages 3.6 yards per carry.  Sophomore Alec Sinkfield (17 carries for 41 yards) and Senior Martell Pettaway (27 carries and 72 yards), who recently decided to redshirt and return next year as a Redshirt Senior, haven’t done much better.

This is either an issue with the scheme or the personnel, or both.  It appears to be both.  West Virginia’s offensive line is bad (like, historically bad), but ultimately it falls on the scheme and coaching.  West Virginia continues to run the Zone Read out of the shotgun with a quarterback that simply isn’t equipped to run that particular offense.  Austin Kendall is a pro style, drop back behind a solid offensive line and get it to playmakers on short passes type of quarterback.  He is not a good downfield passer and he absolutely should be be running the Zone Read offense.

Neal Brown should either change the offense or put in a quarterback (Trey Lowe) capable of running the offense he’s currently running.  Again, this is not an indictment against Austin Kendall or Neal Brown, it’s just a fact.  Trey Lowe is not a savior and he may not even be ready to compete at a high level, but he’s a change to an offense in desperate need of a change.

Albert Einstein, world-renowned genius, once said, “The definition of insanity is doing the same thing over and over again, but expecting different results.”  Let’s stop the insanity and try something different.