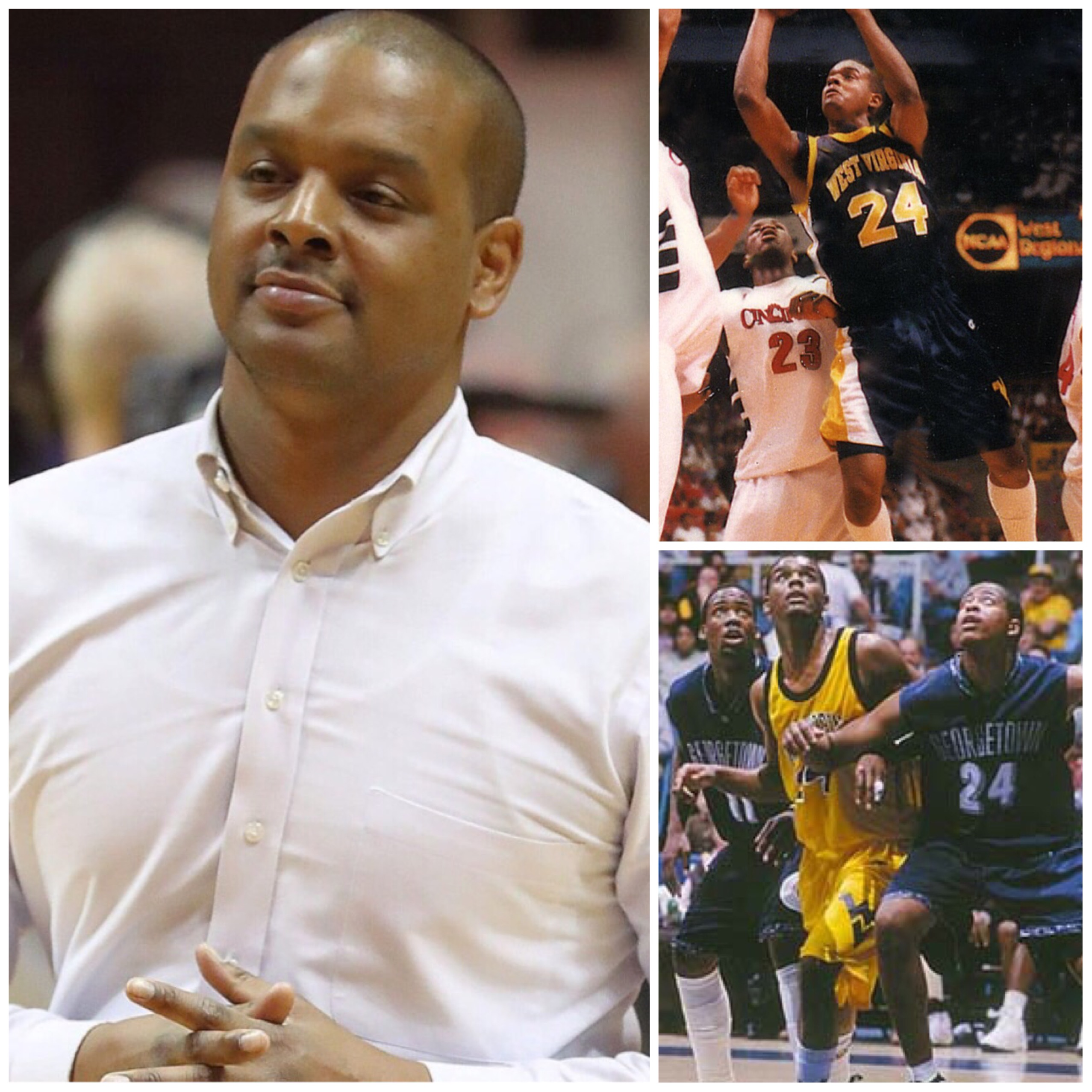 Damian Owens was a four-year starter from 1995-1998.  He scored 1,616 points and had 868 rebounds during career.  At the end of his career in 1998, he ranked 10th in scoring, 9th in rebounding, 9th in assists, 2nd in steals and 6th in blocked shots.   He was the Big East Defensive Player of the Year, a Big East Academic All-Star and Big East All-Conference First Team during his Senior year.  Damian Owens  is one of the hardest workers and among the most consistent players in WVU basketball history.

DO:  That’s very hard to say because it was a compilation of things.  You could go with Sweet 16, but really I would start with where we started at.  We improved every year and got better and better, and so it could be the camaraderie that I built up with my teammates over four years, it could be the NCAA tournament, it could be beating Connecticut, beating Georgetown.  It’s a very difficult question that I answer differently each time that I’m asked it.

Q:  What do you miss most about Morgantown?

DO:  I miss playing.  I know I can’t play anymore, but I miss playing in the Coliseum.  I’m a competitor and have been my whole life.  I miss getting up and down and pushing myself to the limit.  I miss playing against the best competition.  I love Morgantown because of the fans there and the hospitality that I’ve always received there.  And also put this in parentheses (the parties!).

DO:  No, not really.  I may get out there every now and then.  I’ve had three surgeries, so I stick to strictly conditioning and I’m starting to play golf.

Q:  Do you stay in contact with any former teammates?

DO:  I do, I do.  As a matter of fact, every year Bob Huggins has alumni come back.  This year Jerry West, Adrian Pledger, Brent Solheim, Seldon Jefferson and myself were all back for the Oklahoma game, so it was good to catch up with all of those guys.

Q:  How has the game changed since you played?

DO:  In my opinion, the game has come less physical.  I think every decade the physicality goes down.  If you go back to Patrick Ewing and Hakeem Olajuwon they were extremely physical, like almost wrestling or football.  The physical nature of the game has decreased due to the rule changes.  It’s the same in football; they make it harder on the defense so more points are put on the scoreboard.  It really doesn’t have anything to do with the players.  It’s the rules designed to increase scoring.

Q:  If you were playing with today’s rules, how would it have changed your game?  Would you have been more successful?

DO:  I like to play physical, so I would probably foul out quite a bit.

DO:  I played in Italy, France, Philippines, Finland, Venezuela, toured in Japan and China for a bit.  I played some in Canada.  The one I like the best was the Philippines because it was like you were in a baby New York, like a third world New York.  They had everything that we have here.  You could play a game and then go out to TGI Fridays or Chili’s or Outback. They also spoke English very well and the weather was great there.

Q:  Was there a place overseas you didn’t like playing?

Q:  Obviously WVU is having a down year.  Have you followed the team this year?  What do you think has gone wrong?

DO:  I follow the team.  I think we are young.  My class started out not doing so well and we improved every year.  I think they need more time to play together.  You see some real bright spots, especially with the big boy Culver.  I’m not really sure what happened with Esa Ahmad and Wesley Harris but that was a big hit because that was two of our leaders.  And Konate getting hurt with the knee, you lost three of your starters right there.  I think they’re doing about as well as can be expected under the circumstances.

Q:  Would you have liked to have played for Coach Huggins?

DO:  I would have loved it.  The only thing that would throw me is the full court press all the time.  I’m like a shortstop, I watch a certain area of the field and they are everywhere on the press.  But I would have loved to play for Coach Huggins.

Q:  Do you think it would be difficult to play for him?

DO:  No, coaches are supposed to be hard on you.  But it’s obvious that he’s fair and he cares.

Q:  Who is the toughest player you ever played against?

Q:  Do you stay in touch with Coach Catlett at all?

DO:  I do not.  When I was inducted into the Hall of Fame, he was at the ceremony.  That was the first time I talked to him since college and the last time since then.

Q:  Did you have any problems with him?  Any issues with him at all?

DO:  I didn’t have any issues.

Q:  Did you enjoy playing under him?

Q:  Do you want to elaborate at all?

Q:  Do you think collegiate athletes should be paid?

DO:  Great question.  The argument is that they are being paid because they are getting their scholarship paid for.  And that’s true.  However, they make it so hard on some of these kids because they come from lower income households or environments.  They can’t work and aren’t able to provide for their families at home.  So it’s hard.  And plus, it’s turned into a multi-billion dollar industry.  I think they should be rewarded with some kind of stipend.  It wouldn’t have to be $20,000 a year or anything like that, but they should be able to provide for themselves.

Q:  Message for the fans, for Mountaineer Nation?

DO:  I know this is a rough season, but we’re Mountaineers and we weather the storm together.  Give it some time with these young players and the glory days will be back soon.