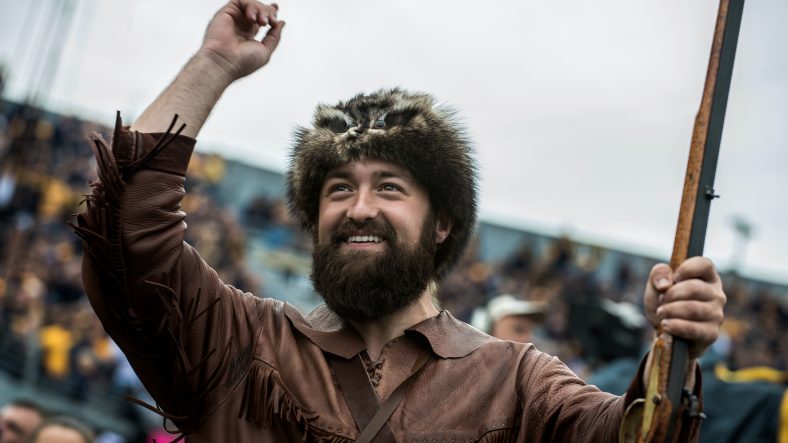 Originally from Elkins, WV, Trevor Kiess has always been a diehard Mountaineer fan.  When Trevor relinquishes his duty as The Mountaineer on April 11th, ending his year-long journey as the mascot of West Virginia, he will have truly appreciated every moment of it.  This is an opportunity that he dreamed about for a long time and he soaked the experience in entirely.    The 65th Mountaineer in WVU history, Trevor has traveled throughout the great state of West Virginia and all over the country during his time as the Mountaineer and  he is extremely grateful to have represented the University for the past year, which he calls the “one of the best of his life.”

The process of becoming the Mountaineer is an extensive one.  And for Trevor Kiess, it was a longer road than most.  His path began during his Senior year in high school.  John Kimble, the Mountaineer at the time, visited Trevor’s high school.  There were a lot of similarities between the two and Trevor started to think that becoming the Mountaineer would be possible for him if he worked really hard and went through the process.  During his Freshman and Sophomore years of college, he engaged in purposeful activities (campus involvement, community service) and became the best student he could be.  As a junior, he applied to become the Mountaineer for the first time.  He filled out the application, answered the essay questions (“Why do you want to be the Mountaineer?”, etc.), went through the 15-20 people panel interview, and then the finalists were cut to 10.  And then 4.  At this point, there is a cheer off at a home basketball game.  He was chosen as the alternate his Junior year.  He went through the whole process again during his Senior year and was finally chosen to represent the university and the state of West Virginia as the Mountaineer.

During his time as the Mountaineer, Trevor will participate in approximately 400 events.  Traveling throughout the state, he represents the University.  Trevor said that he feels a real sense of  duty when the team has away games:  “I feel a tremedous responsibility when we’re on the road to represent the entire state of West Virginia well and show how great our state and its people are.”

Unlike other mascots, The Mountaineer is out there in the open, without a big mask or head on, and it’s just different than anywhere else.  There’s nowhere to hide and it simply means more to be The Mountaineer than say, the Horned Frog from TCU.  Trevor Kiess, and a long line of former Mountaineers, takes a real genuine pride in showing the country what it is be a true West Virginian.

Among the most meaningful memories of his time as the Mountaineer, “running out and leading the football team onto Mountaineer Field for the first time” ranks at the top.   Others include Big 12 Media Day in Dallas and traveling the state with the coaches in the summer for caravan events.  Trevor recalled one of the most endearing moments as Mountaineer for him:  “I met a boy from very near my hometown; the boy had been in an accident and was receiving care at Ruby Memorial Hospital.  His family reached out and asked for me to visit.  I was happy to do it and even got Will Grier and David Sills to accompany me.  Although the boy was nonverbal at the time, I will never forget the look on his face when Will Grier, David Sills and himself walked through the door.”

West Virginia University is completing the process of selecting the new Mountaineer and Trevor is very involved with the process.  “The final four candidates will be announced in the coming days and their cheer off will be during the home basketball game against Kansas State on Monday, February 18th.  The new Mountaineer will be selected on February 26.  I will continue my duties until April 11th when I will turn it over to the new Mountaineer.  The New Mountaineer’s first events will be a home baseball game against Texas Tech on April 12th and the Blue/Gold Spring Football Game on April 13th.”  Trevor will graduated in May with his Master’s Degree in Business Administration and hopes to work in Morgantown while he catches his breath for the next year.  After that, he said, he “might go to Law School or continue into the workforce.”

Typically an end of a run like this would be bittersweet and almost tinged with sadness, but Trevor Kiess is overwhelming estatic to get to serve our state and university every day, every minute, every second that he gets to do it.  There have been many great Mountaineers that have carried the musket and donned the buckskins and coonskin hat, but Trevor Kiess has represented our great state and shown the country what it’s like to be a true Mountaineer as well as anyone ever has.

Trevor Kiess’ message to the fans, to Mountaineer Nation:

Q:  How did you become the Mountaineer?  What’s the process like?

Q:  Do you feel a responsibility to represent the state as a whole when traveling with the teams?

Q:  What is your best memory as the Mountaineer?

Q:  What is your favorite part of being the Mountaineer?

Q:  Are you recognized out in public?

Q:  What are your future plans?

Q:  Has the new Mountaineer been chosen?  Do you play a part in the selection?

Q:  Do you get together with former Mountaineers?  Do you stay in touch with them?

Q:  What is your favorite mascot in sports other than the Mountaineer?

Q:  What is your favorite sport to attend as the Mountaineer?