Would You Ever Root for Pitt? 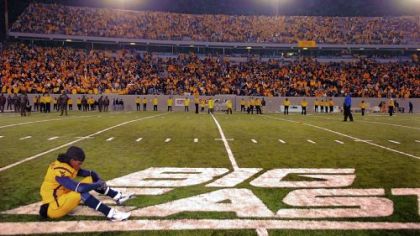 It’s still early, but five games into the Mountaineer season, there is a clear obstacle between West Virginia and the College Football Playoff: An undefeated Notre Dame team.

Let’s be real. There is no way the committee leaves an undefeated Fighting Irish on the outside looking in. There’s just too much money to be made by them being in the playoff. Plus, if we’re being honest, if they go undefeated they most likely belong in the top four.

Pitt, on the other hand, is nowhere near a berth in the College Football Playoff. They are coming off of an impressive home win over Syracuse. Impressive by the current standards of Pitt football anyway. Their record sits at 3-3. They’ve been completely blown out by Penn State (51-6) and Central Florida (45-14).

One thing you can say about Pitt is they know how to get up for a big game. For a team that spends most of their time outside of the rankings and hovering around .500, they’ve had some huge upset wins. One of those we will not discuss.

Let’s look at some of the more recent upsets by the Pitt football team.

The 2017 Pitt team finished with a 5-7 record. They closed out the season with a big win over No. 14 Miami. Pitt had absolutely nothing to play for in this game, but still got up to take down the Hurricanes.

All Miami had to do was beat a 4-7 Pitt team and they were in the College Football Playoff. Instead a trip to Pittsburgh fired up a season-ending three-game losing streak. Miami lost to Clemson in the ACC Championship 38-3 and then followed that up with a 34-24 loss to Wisconsin in the Capital One Orange Bowl.

Pitt sure knows how to cap off a disaster of a season with a big win.

Pitt’s 2016 season ended with an 8-4 record. That includes a pair of epic upsets. The Panthers went into Death Valley and took down the No. Clemson Tigers, who were the eventual national champions. This ranks up there with any of Pitt’s upsets. But that wasn’t the only major upset for Pitt that season.

At the time this game happened, this upset didn’t seem like that big of a deal. As the season went on, this game proved to be what kept Penn State out of the College Football Playoff. Penn State’s only other loss was a 49-10 loss at the Big House. Penn State defeated Ohio State at home and then took down Wisconsin for the Big 10 Championship.

Because Pitt rolls into South Bend Saturday as massive underdogs when they take on the Notre Dame Fighting Irish. On top of that, as stated earlier, Notre Dame is undefeated and ahead of West Virginia in the polls. A Pitt win over the Irish puts the Mountaineers in prime condition to control their own destiny. So this begs the question:

Would You Ever Root for Pitt?

The ultimate situation to root for Pitt would be if the Mountaineers needed a loss to get into the College Football Playoff in the final week of the season and Pitt was in the position to defeat that team. At that point would you root for Pitt, if a Pitt win surely results in a Mountaineer College Football Playoff Berth. Would you do it? You’d almost have to, wouldn’t you?

To be clear, this isn’t that type of matchup with Notre Dame this week. West Virginia still has plenty challenges remaining on the schedule. A WVU fan could hypothetically cheer Pitt on to a win and watch West Virginia in the Liberty Bowl this December. I don’t think we’re at a time in the season where drastic measures such as rooting for Pitt should be considered.

Also, people hate Notre Dame. I’m sure there are some Mountaineer fans who are rooting for Pitt this week just based on that. There’s something about a Notre Dame team that wins a few games and vaults into the top 5 that makes them very hateable. Plus everyone has that annoying friend who is a Notre Dame fan. That guy is the worst.

I am Catholic and have some Notre Dame fans in my family. I like to point out there are other Catholic schools. Tons of them. Go Boston College. Flutie Flakes. They beat the green uniform wearing Irish a time or two I’d say.

If there’s a time to root for Pitt, this is not it. Not for me anyway. Let’s see West Virginia beat Texas on the road. Then we start considering insane options like rooting for Pitt. Plus, if West Virginia wins out, beats Texas on the road, beats Oklahoma, then beats Texas or Oklahoma again in the Big 12 Championship, the Mountaineers are in the College Football Playoff. Mark it down.